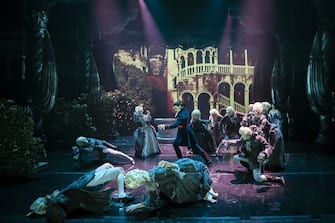 A first (of three dates) to be sold out for Casanova Opera Pop, unpublished musical theater show created and composed by Red Canzian. On the stage of the Malibran Theater in Venice, two hours of music and 35 unreleased songs sung live, 21 performers, 120 costumes, over 30 scene changes, immersive sets and innovative stylistic choices. The show is based on Matteo Strukul’s best-seller “Giacomo Casanova – the sonata of broken hearts“, Directed by Emanuele Gamba, the costumes designed by Desirée Costanzo and made by Atelier Stefano Nicolao

In the role of Giacomo Casanova we find Gian Marco Schiaretti, one of the purest talents raised in Italy and also successful abroad. Next to him, in the part of the enchanting and strong-willed Francesca Erizzo, destined to conquer his heart, the young and already successful Angelica Cinquantini

The role of the wicked, ready to take advantage of a moment of fragility of the Serenissima and of the Doge who governs it, is entrusted to the bearded vulture, the powerful and corrupt Inquisitor Pietro Garzoni who without the slightest scruple is ready to sweep away everything that is an obstacle to him to obtain the power of the cardinal, and to Manuela Zanier, or the perfidious Countess Von Steinberg, an Austrian noble not insensitive to the charm of Casanova, but ready to weave deadly plots to pursue her own interest and exercise her charm according to convenience

To paint the picture of a Venice whose history and salvation are played out between the bácari populated by various humanity and the palaces of power, characters with different facets. The placid and grumpy Friar Balbi, played by Paolo Barillari; the offended boyfriend Alvise ready to challenge Casanova to a duel and the noble Mocenigo played by Jacopo Sarno; the perfidious Zago to whom Roberto Colombo lends his face and a physicality transformed by perfidy; the Doge Loredan and the noble of lineage and heart Bragadin, played by Antonio Orler

On stage also the vast female world so fascinated by Casanova, as it is indispensable to untie the knots of history. Elena of Padua, Casanova’s favorite courtesan played by Silvia Scartozzoni; the beautiful Rosa, owner of the Cantina do Mori and capable of interpreting the signs that hide the dark plots, in whose clothes we find Rosita Denti; finally the melancholy and unfortunate Gretchen, with the face of Alice Grasso, the Countess’s maid and predestined victim of the unscrupulous perfidy of the Inquisitor and the enslaved Zago

The cast is completed with a corps de ballet of 10 acrobatic dancers – Mirko Aiello, Cassandra Bianco, Alberto Chianello, Eleonora Dominici, Federica Esaminato, Mattia Fazioli, Filomena Fusco, Raffaele Guarino, Vittoria Markov and Olaf Olguin – who in the warrior style choreography by Martina Nadalini and Roberto Carrozzino, in various moments they interpret the Shadows, the Venetians at the Carnival, the nobles in celebration and the choral moments of history

“It has been two very long and difficult years for theater and music and the difficulties are not over, but I fought with all my strength, myself and all the wonderful people involved in this project, to go on stage with Casanova Opera Pop in this early 2022, without waiting any longer, “said Red Canzian, in a message sent. The artist, who was not present due to health problems, added: “I look at our show as a tenaciously desired child, who grows wonderful day after day and who I can’t wait to show to the world”

Milo Manara has drawn the artwork of Casanova Opera Pop, an original work of art, in which the typical features of his characters blend with those of the protagonists chosen to play Giacomo Casanova and his young lover Francesca Erizzo. The artist returned after almost forty years to dedicate his art to the character for which he had collaborated with Federico Fellini, creating wonderful tables, making a Fellini film with drawings on an iconic Casanova