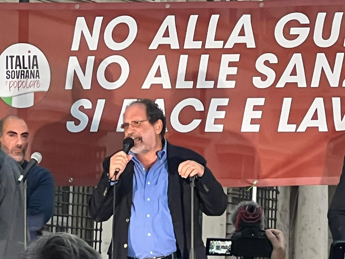 “Based on what I’ve read about the ‘indecent proposal’ made to Francesco Toscano who was offered half of the party’s coffers, made up of contributions from members, to leave the presidency of Ancora Italia, I say that my reaction is one of indignation for the fact and solidarity with Toscano. If I were still the prosecutor, I would have already opened an investigation into a fact, now public, which demonstrates there has been an attempt at private corruption and embezzlement of the cash of a party which is and could only belong exclusively to the members of the party itself”. To tell Adnkronos is the former Deputy Prosecutor of Palermo Antonio Ingroia, today a lawyer and leader of Sovereign and Popular Italy, precisely with Francesco Toscano, commenting on the events of the last few days that see Francesco Toscano and Mario Gallo, respectively president, at the center and secretary of the small civic movement Italia Sovrana e Popolare.


Immediately after the elections, as told by Il Fatto Quotidiano, Toscano would have been contacted on WhatsApp by the lawyer Sergio Carlino on behalf of Gallo: “Yesterday I spoke to Marco Rizzo – it is the content of an audio – know that there is pressure. Let’s make an agreement whereby you leave the presidency due to incompatibility and we will still recognize you 50% of what is in the box. 50%, which corresponds to about 20,000 euros net, after deducting the expenses of the last 2-3 months”. Basically, according to what emerges, the party secretary, through his lawyer, would have proposed to the president to accept the money from members and donations in exchange for renouncing office. The lawyer confirmed everything to the Fatto and justified himself as follows: “The intent was to seek an agreement also of an economic nature, because Toscano worked intensely for two years and was one of the architects of this small electoral exploit”. Toscano not only has no intention of leaving the presidency, but also threatens to take everything to the prosecutor’s office: “He absolutely refuses any proposal for the division of the association’s assets, which is truly inadmissible and offensive,” his lawyer said.

And today comes the reply from Antonio Ingroia: “As a lawyer, as I am today, I can only hope that some Public Prosecutor’s Office will open an investigation, also to protect the head of a political party subjected to evidently undue and covertly intimidating pressures – he continues Ingroia, who is President of Civil Action – As a political leader, together with Francesco Toscano, on the front of dissent, who with Italia Sovrana and Popolare gathered almost 400,000 votes in the last elections, I can only express solidarity with Francesco because this episode appears as the latest in a systematic, evidently political attack on Francis’ role as leader of the true opposition to the prevailing system, an attack that manifests itself – not surprisingly – through the usual intimidating stylistic elements that should arouse real concerns in those who really care about democracy rather than underestimations and completely out of place ironies”.