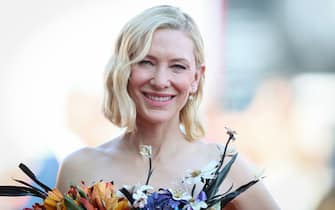 Absolute protagonist of the second day of the Venice Film Festival, Cate Blanchett at the Lido he showed off his unmistakable Hollywood class. The star stole the show with a Schiaparelli looka dark suit with an irresistible floral detail

The look worn by the Oscar-winning actress is a creation of the famous French maison that has been using the artistic direction of the American designer Daniel Roseberry for several seasons.

In detail, Cate Blanchett wore a black velvet suit consisting of very long wide-cut trousers and a bustier with back lacing, embellished on the front with an exuberant floral decor

The bustier was, in fact, conceived as a support for a composition of wildflowers, positioned only apparently in a spontaneous way. The look, with the original 3D decoration, was shown to the public for the first time during the presentation show of the Schiaparelli Couture line collection, Winter 2022 season.

WATCH THE LATEST VIDEOS of the Venice Film Festival

Blanchett’s look did not include flashy jewels, a style choice that fits perfectly with this type of dress. The actress only wore a pair of earrings to frame her face

Even the beauty look is simpler than ever. The make-up, with light shades, highlighted the perfect complexion of the Australian actress who for this occasion also avoided lipstick by opting for a nude color

Frequent guest of the Venice Film Festival, Cate Blanchett is certainly one of the most anticipated protagonists of the 79th edition. Tára film in Competition, written and directed by Todd Field, represents a turning point in his recent filmography

Interpreter of legendary and iconic roles, the 53-year-old admitted in a press conference that she understood from the first reading of the script that her character in the film was very complex, perhaps the most demanding for her since the days of Elizabeth and Elizabeth – The Golden Age

Venice Film Festival: the most beautiful looks and clothes of the past editions

In Tár Blanchett plays the controversial conductor Lydia Tár. The floral detail of her dress is in fact a reference to the bouquet of flowers that, traditionally, is given to the professional at the end of the concert

This Venetian appearance by Blanchett was also curated from a styling point of view by Elizabeth Stewart who has been in charge of the star’s image for a long time.