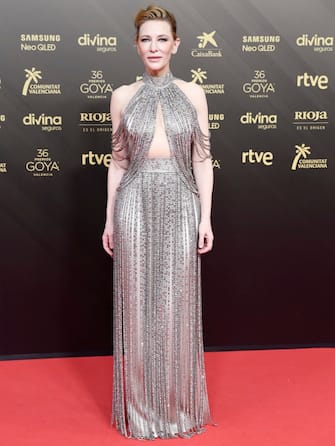 Cate Blanchett on the red carpet of the 2022 Goya Awards in Madrid. The diva wore for the occasion an Armani crystal fringed dress with which she shone. Literally

WATCH THE VIDEO: The New Boy, the new film with Cate Blanchett

Here is Cate Blanchett on the red carpet in a shot in which she looks to all intents and purposes a 1930s diva. The jeweled Armani dress makes her the undisputed queen of red carpet elegance

Cate Blanchett protagonist of the new film by Pedro Almodóvar

In addition to receiving the Goya Award, Cate Blanchett should also be presented with an Elegance Award

The fair of illusions, backstage video of the film by Guillermo del Toro

The Armani dress with crystal-encrusted fringes is enriched with a silver-colored satin slip. The heels are also in silver satin

The Champions, Ben Stiller and Cate Blanchett in the film adaptation

Cate Blanchett on stage during the award ceremony, together with Pedro Almodovar and Penelope Cruz

Nightmare Alley, the teaser trailer of the film by Guillermo del Toro

Let’s now pass to the other dream dress worn on the occasion of the Goya awards that were held a few hours ago in Madrid. We are talking about the dress worn by Penelope Cruz, signed by Chanel

Javier Bardem, the moving declaration of love to Penélope Cruz

Here is Penelope Cruz as she walks on the red carpet, intent on greeting fans with a dress with a 50s aftertaste by Chanel

Penelope Cruz and Pedro Almodóvar still together: all their films

A freshness combined with a good dose of elegance, that’s why the look sported by Penelope Cruz is so popular with all of us

Here is Penelope Cruz with her husband, Javier Bardem. A little in advance of Valentine’s Day, which is celebrated today, the actor made her wife move with a speech in which he renewed all the love he feels for her.

Cannes 2018, Penelope Cruz and Javier Bardem on the Croisette. PHOTO

Find out all the news about Penelope Cruz