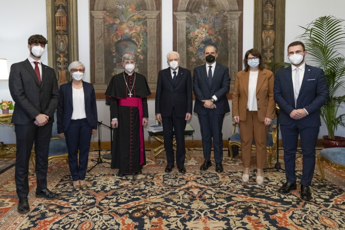 “Closeness and appreciation” of all Catholic Action for the work that the President of the Republic, Sergio Mattarella, has carried out and continues to perform throughout his seven years, “for his work as a tireless weaver of the democratic and republican fabric of the country, of ‘organizer of hope’, for a moral rebirth capable of giving new impetus to the relationship between institutions and citizens, for the modernization of the country “. This was underlined by the president of the Italian Catholic Action, Giuseppe Notarstefano, during the hearing granted at the Quirinale by the Head of State to a delegation of the Association.

It was also highlighted Mattarella’s commitment And its proximity towards all Italians in this long pandemic season. In underlining the attention to democracy experienced by the Association, not only historically but daily conjugated, Notarstefano and the other members of the delegation proposed to the Head of State the particular attention paid by Catholic Action to the protagonism of children in the life of the Church and of the country, to the accompaniment and closeness to the younger generations in dealing with the problems that characterize the world of school and work, to the centrality of the intergenerational relationship, young adults and children, as a resource for the relaunch of the country. Attentions – a note from the AC reported – which found “a profound consonance” with President Mattarella.