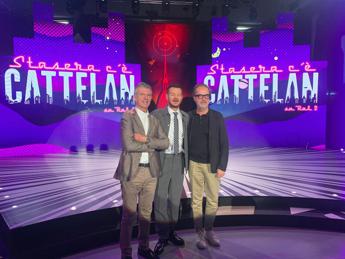 The host aired Tuesday, Wednesday and Thursday for 6 weeks, “the late show is my natural habitat”

After the Eurovision experience, Alessandro Cattelan restarts from Turin. From tomorrow evening he will in fact be the protagonist in the second evening on Rai 2 of the late night show ‘Tonight there is Cattelan … on Rai2’ which will air for six weeks, three from Turin and three from Milan, for three consecutive evenings, on Tuesday , on Wednesdays and Thursdays with a format that includes great guests, musical moments, features and reflections on current events. With him in the studio the Street Clerks band and the newcomer Mike Lennon. The program takes up the experience of the lucky ‘And then there is Cattelan’ aired on Sky. “I go back to my natural habitat, which is the late show”, emphasized Cattelan.


During the evenings, exponents from the world of sport, music, entertainment, cinema and pop culture will alternate. Guests tomorrow of the first evening Bobo TV, Bobo Vieri, Antonio Cassano, Lele Adani and Nicola Ventola, but also Emanuela Fanelli. On Wednesday it will be Fabio Caressa and Ariete’s turn, while on Thursday there will be the national basketball coach Gianmarco Pozzecco and Lazza. After the first tranche, a longer one of 10 weeks will start again from January.

“It is the kind of program that I dreamed of doing since I started making TV and which I think is also the kind that is best for me – said Cattelan presenting the program – I am very happy to be part of the Rai 2 project and to restart from a very beautiful city and where I left a little piece of my heart. Three evenings a week are the right time for this kind of program because in this way a routine is created in the public which is important “

“Each episode will be different from the other, in each we will try to insert ideas to make them unique, for the rest it is the old band that gets back together. We can’t wait to start”, he concluded.

“‘Tonight there is Cattelan’ is a connotative transmission of the new Rai2 that we are trying to build, it is the beginning of a new course”, said Stefano Coletta, Prime Time Entertainment Director of Rai. “It is the mirror of what we want to try to do, bring new languages, people and artists who can speak to a wider and younger audience. The entertainment genre also contains a lot of reading of the present time, for me it would be great to bring back the 40-year-olds on Rai2 “, he continued without compromising on the share objectives. “My experience has taught me that for what is not weekly but serial you have to wait three to four weeks to take stock. The second evening also depends on the driving force of the first”, observed Coletta.

“Let’s pick up where we left off, this team was also compact with the Eurovision Song Contest. Turin in 2022 has an extraordinary role, a magic formula has been created here, we hope that the new format will be the starting point for attendance for a time slot. network that we care a lot about “, added Claudio Fasulo, Prime Time Entertainment Deputy Director, who continued:” our passion for Alessandro is beyond doubt and what we are thinking of doing is to put him in his comfort zone, or in any case in the his favorite professional phase which is the late night show, a format made of unpredictable bricks that are news, entertainment, ideas, music, a lot of sport “

“Setting up the format was not easy because the moment is not easy, there were difficulties in finding the raw materials, but now they have been overcome and we are here proud to be”, said Guido Rossi, director of the Rai Production Center of Turin. “It is a project in which we strongly believe, after three weeks in Turin the format will move to Milan with the scenographies of Turin, demonstrating a very close relationship of synergy”, concluded Rossi, underlining that for the center “an autumn season has begun. of great commitment “.