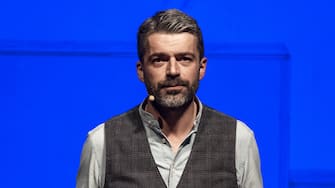 Among the protagonists of the third season of Celebrity Hunted, which will air on Prime Video in 2022, is the actor Luca Argentero. Argentero is currently in the cast of the series “The Ignorant Fairies”, directed by Ferzan Ozpetek, based on the film of the same name. Since 2012 he has been vice president of the non-profit organization 1caffe.org which tries to revive the tradition of “suspended coffee” for charity

Together with Luca Argentero, he participates in Celebrity Hunted 3, his wife Cristina Marino. Since 2018 Cristina is in the cast of the second and third season of the TV series “L’isola di Pietro”. The following year she, on the other hand, starred both in the film “The seller of women” by Fabio Resinaro and in the film “The talent of the hornet” directed by Giacomo Cimini. The shooting of the film “Men from the sidewalk” directed by Francesco Albanese has just ended

Luca Argentero and Cristina Marino, the photos of the honeymoon

Celebrity Hunted 3 also sees Katia Follesa among the competitors. The artist made his television debut in 2004, together with Valeria Graci in the duo Katia and Valeria. In the following years they give life to Zelig Circus to several characters including the two dazed aspiring Miss Italy and Katiana and Valeriana. Since 2018 it has been on air every day on Radio 101 paired with Alvin. Katia Follesa has also worked in the cinema debuting in 2011 in Christmas holidays in Cortinadirected by Neri Parenti and in 2012 in Welcome to the north directed by Luca Miniero.

Salvatore Esposito Neapolitan class of ’86, he studied at the Beatrice Bracco Theater Academy and then at the Naples Film School. Later he moved to Rome, where in 2013 he was hired for his first role in the TV series Il clan dei camorristi. Success comes with Gomorra – The series (2014) based on the novel by Roberto Saviano … In 2020 he began shooting the comedy Rosanero by Andrea Porporati and the film The Last Supper by Davide Minnella. In 2021 Salvatore publishes his first novel Lo Sciamano.

Esposito’s partner in this third edition of Celebrity Hunted is Marco D’Amore with whom he worked in Gomorra La Serie. . Since 2005 he has written, directed and produced for the theater, cinema and television, The first film made together with the director and screenwriter Francesco Ghiaccio. “A safe place” earned him the Silver Ribbon for the civil value of the work. In 2019, Marco writes, directs and interprets the film “The Immortal” with which he wins the Silver Ribbon for Best New Director and the nomination for a David di Donatello.

Security, the review of the film with Marco D’Amore

Ciro Priello, Neapolitan, born in 1986. is one of the contestants of Celebrity Hunted 3. The Jackal’s symbolic face becomes the protagonist of “AFMV (Goodbye fucking green faces)”, the group’s first film. Over the years he has participated as an actor in various film productions: “I have to think” (2015), “Gatta Cenerentola” (2017), “The Sadness has a light sleeper” (2021) and last but not least will have a role in the new film by Giampaolo Morelli “Make it turn” to be released in 2022. In 2020 he lands on Prime Video in the first edition of the “LOL” program, winning the broadcast.

Together with Ciro Priello, there is Fabio Balsamo, born in Casalnuovo di Napoli in 1989. He is known to the general public above all for being part of the beloved The Jackal, but his artistic career also includes theater, cinema and TV with important collaborations and artistic experiences including those with Maurizio Casagrande and Massimiliano Gallo.

Who are The Jackal

Born in 1994, Rkomi began his career at just 17 with the first self-produced mixtapes. Currently Rkomi after the release of the single in the company of Elodie, La coda del diavolo, is in radio rotation with Insuperabile, a song that he brought into competition on the stage of this year’s Sanremo Festival.

Rkomi in concert, all tour dates

Filippo Maria Fanti, aka Irama, born in Carrara on December 20, 1995., will be part of the cast of the third edition of Celebrity Hunted. At just 26 years old, Irama is one of the most successful artists in the current Italian music scene and, with his hits, he has already collected 29 platinum records, 3 gold records with over 1 billion and 200 million streaming and over 650 millions of views for his videos.

Celebrity Hunted – Manhunt it’s a real-life thriller which sees a group of celebrities fleeing the length and breadth of Italy, in an attempt to remain anonymous and preserve their freedom for two weeks, with limited economic resources. They will be chased by some of the best known professional analysts and investigators, cyber security experts, profilers and human trackers from law enforcement and military intelligence services.