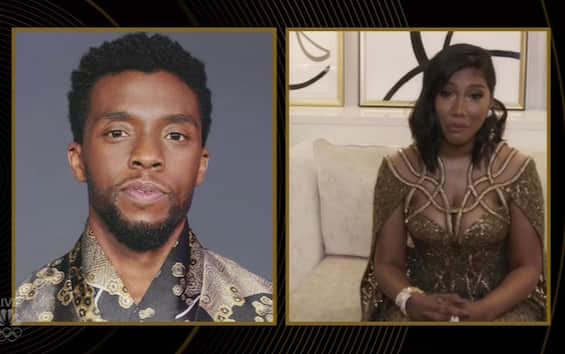 Chadwick Boseman was an actor best known for his portrayal of T’Challa alias Black Panther. On August 28, 2020, the actor passed away from colon cancer with which he had fought for four years. Two years after his untimely death, the late actor was awarded a Creative Arts Emmy Award for voiceover in the animated series What If…?

His widow Taylor Simone Leonard she took the stage last Saturday 3 September to receive the posthumous award. Visibly moved and her voice broken by tears, the woman declared that her husband would be very honored to receive this award. Kevin Feige, one of Marvel’s top executives, said that “in hindsight, this is all very moving.” Chadwick Boseman and Taylor Simone Leonard met in 2015 but kept their marriage a secret practically until the day of the actor’s tragic death, when it was reported in a statement that “he left with his wife and family at his side. of him”. His latest film, released posthumously, is But Rainey’s Black Bottom from George C. Wolfe and gave him a Golden Globe in 2021 (again posthumously) in the category Best Actor in a Drama Film, an award awarded to him six months after his death. Even in that case, his widow Taylor Simone Leonard went to collect the award very excited. Chadwick Boseman has disappeared without leaving an official will. In this regard, the widow has decided to equally divide her inheritance of approximately $ 2.3 million with her parents Leroy and Carolyn Boseman.

The career of Chadwick Boseman

After a series of short films, the actor made his film debut in 2008 with The Express by Gary Fleder. In 2016 it appears in Gods of Egypt in the role of Thoth, but his most iconic part remains that of Black Panther which, in addition to appearing in the film of the same name, we also see it in Captain America: Civil War (2016), Avengers: Infinity War (2018) and Avengers: Endgame (2019). For the sequel Black Panther: Wakanda Forever, due out on Friday 11 November, the production has decided in his honor not to replace the Black Panther character with another face. Finally, regarding the career of Chadwick Boseman on the small screen, its longest-running part is that of Graham McNair in Unknown people, a role he held for 13 episodes. For the rest, many sporadic appearances in successful TV series such as Cold Case – Unresolved Crimes, ER – Frontline Doctors, CSI: New York, Fringe And Law & Order – The two faces of justice.