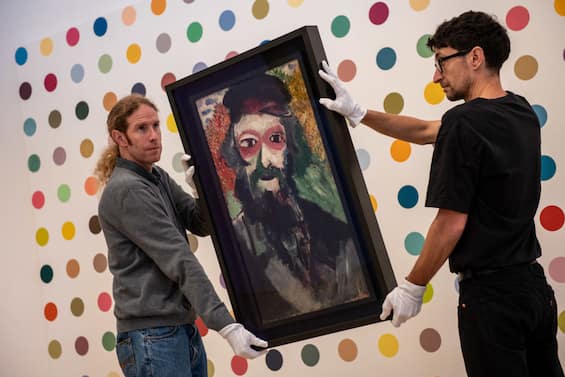 A painting by the Russian naturalized French painter Marc Chagall (1887- 1985), who

it was part of the 15 works stolen by the Nazis and finally returned by France to the heirs of the plundered families, was sold for 7.4 million dollars at the Phillips auction in New York.

The original owner is a Polish-Jewish luthier

The 1911 oil on canvas entitled “Le Père” (The Father) was purchased in 1928 by a Polish-Jewish luthier, David Cender, who lost his possessions when he was forced to move to the Lodz Ghetto. Deported to Auschwitz, where his wife and daughter were killed, Cender survived and moved to France in 1958, where he died in 1966 without repossessing the painting. Meanwhile, the work had reappeared in some exhibitions, and Marc Chagall himself had repurchased it, probably between 1947 and 1953, without knowing its origin, according to Phillips and the French Ministry of Culture. After the artist’s death, “Le Père” entered the French national collections in 1988, to then be assigned to the Center Pompidou and deposited at the Musée d’art et d’histoire du Judaïsme in Paris.

The return to the heirs and the auction

The painting was returned a few months ago to the heirs of David Cender following a historic decision by the French National Assembly on the return to museums and legitimate owners of the works that had been unjustly stolen by the Nazis during the Second World War. This is the first work that is part of the 15 works of art returned by the will of the French Parliament to go to auction.