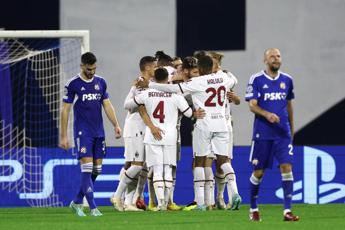 To score Gabbia, Leao, Giroud on a penalty kick. Own Goal by Ljubicic

The Milan imposes itself with authority on the field of Dinamo Zagreb 4-0, thanks to goals from Gabbia, Leao, Giroud from a penalty kick and the own goal from Ljubicic, and climbs to second place in Champions League group E with 7 points behind Chelsea with 10, and in front of Salzburg stopped at 6 after the ko with Londoners. For the challenge Pioli chooses a front-wheel drive attack, with Rebic, De Ketelaere and Leao behind Giroud, while Cacic confirms the predictions of the eve and deploys the same line-up of the first leg, with Petkovic-Orsic an offensive pair; Moharrami and Ljubicic on the outside lanes.

Balanced first half with a good start by Dinamo Zagreb that creates a couple of chances, with a wide shot by Ljubicic and a right-footed shot by Ivanusec from the edge that Tatarusanu rejects with boxing gloves. Then the Rossoneri conquered the field, engaging the goalkeeper with Giroud before the goal of the advantage in the 39th minute signed by Gabbia with a header from Tonali’s free-kick.

The second half began immediately in the sign of the Rossoneri and in the 50th minute the doubling arrived: Hernandez supported for Leao, failed triangulation, but the Portuguese won the contrast with Sutalo and beat Livakovic from two steps. Then it’s up to Giroud who, in the 53rd minute with his header, engages the opposing goalkeeper and in the 59th minute the AC Milan trio falls on a penalty kick awarded for a foul by Ljubicic on Tonali. After a volley again by the Frenchman with an assist from Leao, Pioli’s team of poker arrives.

At 69 ‘yet another tear by Leao who overtakes the opponent, enters the area and serves Giroud, who misses the ball but propitiates Ljubicic’s own goal for the 4-0. In the final Milan still dangerous, in the 82nd minute Pobega beats Livakovic but Origi was in the offside position and the goal was canceled. While at 84 ‘Rebic’s assist for Krunic who wastes only in front of Livakovic. Finally at 88 ‘Milan still close to the manita: Origi defends the ball and throws Rebic towards the area, the Croatian’s left diagonal just out.