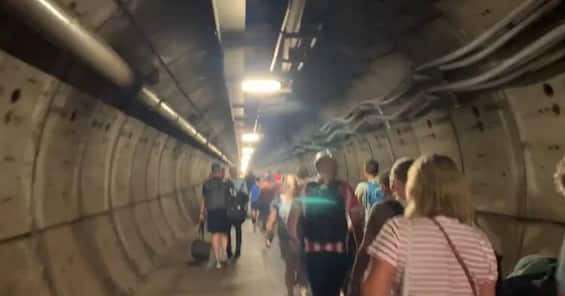 Dozens of people were stranded for hours inside the Channel Tunnel following a breakdown in a train that left Calais and headed for Folkestone. As happens more and more often, the story is all documented in a video that shows the evacuation, on foot, through the service tunnel of the Eurotunnel Le Shuttle. The BBC website reports it. The video shows passengers walking along an emergency tunnel between the UK and France. Eventually they were transferred to a replacement train and managed to reach Folkestone station in Kent. Le Shuttle reported that the train alarms were triggered so it was necessary to analyze the situation, which made the inconvenience inevitable.

The story of one of the passengers

“The service tunnel was terrifying,” said one passenger. “It was like a disaster movie. We walked into the abyss without knowing what was happening, all queuing under the sea. There was a woman crying in the tunnel, another woman had a panic attack, she was traveling alone. “A lot of people were going crazy in the service tunnel – another passenger said – We were stuck there for at least five hours,” she concluded.