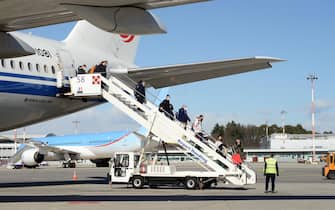 In the airports of Europe there are no inefficiencies and inconveniences for those who are preparing to leave for the summer holidays. For months the flights have suffered cancellations And delays due to issues affecting airlines, including a lack of staff

WATCH THE VIDEO: Covid and travel, masks in Europe: the rules

Sunday 17 July in Italy there will be one strike of the staff of the airlines Ryanair, EasyJet, Volotea and Malta Air, as well as of the ground staff of ENAV. It is estimated that there will be more than 600 canceled flights

Sky VOICE: Covid and holidays, such as refunds if you are positive. WATCH THE VIDEO

Bloomberg he drew up a ranking of European airports that are experiencing greater inconvenience. The analysis, carried out using the data collected by the specialized agency Hopper Inc, refers to the first nine days of July 2022. Show i ten worst stopovers of Europe for delayed flights and registered cancellations

Air transport, strike on Sunday 17 July: which flights are at risk

According to the ranking, al first place theBrussels airport with 72% of flights delayed and 2.5% of flights canceled in the period considered

Chaos flights, the Ministry recommends “travel only with hand luggage”. The prices of the companies

Bloomberg also ranked the best airports. At the top of the ranking is the Italian Orio al Serio which records the best punctuality index in the European air transport panorama. In the first ten days of July, Bergamo airport was the one in which the impact was more contained and better managed, with 3% of delayed flights and one flight canceled for every 100 scheduled

To contribute to the result -explains the management company Sacbo- “on the one hand the operational aspect, characterized by the management of passenger flows which are also in considerable growth up to equalizing the pre-Covid levels and by compliance with the turn-around of aircraft at soil, and on the other the positive effect of the recent ones infrastructural adjustments that allow time savings and a greater capacity to use the aprons ”