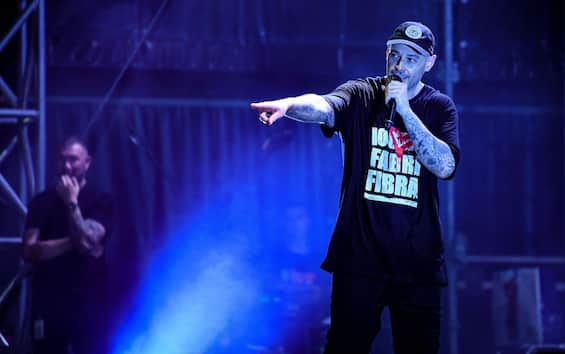 “Let me understand, when you are looking for me I am always there, when I am looking for you you are never there”. The first lines of Chaos they seem like unspoken thoughts more than recriminations directed at another person, especially once they are listened to in the video clip that has just been released. It is an extremely minimal work that was designed to launch the song that gives the title to the latest album by Fabri Fibra: an elegant black and white envelops him and his companions in this track, the young Madame and Lazza. All three never appear together on the scene, but are often framed in asphyxiated close-ups, as if to accentuate the sense of claustrophobic solitude that emerges from the text. The work is the third video clip for a song on the album and, like the previous ones Propaganda And Starsthis too can count on the direction of the veteran Cosimo Alemà. The director and Fibra thus confirm their fruitful partnership which began in 2006 with the historic video of Applause for Fibrathe one in which the rapper showed the ironic t-shirt “I hate Fabri Fibra”.

In 2006 Lazza was twelve and Madame even four. Many of the rappers who were fashionable at the time have been supplanted by the new generation. Fabri Fibra is still here also because he has shown himself capable of updating himself and of dealing with younger artists, those for whom he “has always been” and represents a cornerstone of Italian music. But don’t think that Fabrizio Tarducci had no doubts or moments of stalemate along the way. Chaos at first superficial reading it can be interpreted as a passage dedicated to a love that goes away “without even saying hello” but it is Fibra himself who gives us another deeper key to analyze the text: “The passage speaks of that feeling that you feel when you are far from what makes you feel good, whether it is a person, a passion, in my case music “. Fabri Fibra had been away from the scene for a while, looking for that inspiration that would make him create something up to his level and his fame. The song tells of the accumulation of things in Fibra’s head, an accumulation that was curbed by “throwing out” everything that contributed to the inner chaos: “Lazza’s refrain fully expresses that suffering and nostalgia. Madame’s verse and mine are two completely different styles that manage to coexist perfectly on this basis of Lowkidd, ”explained the rapper presenting the new track.

The only time two people are seen sharing the scene in the video is… Fabri and Fibra. In fact, the artist splits himself, almost as if there were a confrontation with the self of the past, the one that even he has to deal with every time he proposes something new, feeling accused of no longer being “the one of Youth disorders you hate Betrayal“. On the other hand, listening to the whole album it is clear that it is a more introspective work than those released in the past. This is confirmed by the same MC born in Senigallia: “All my previous records are the result of what I saw on the outside, this is certainly a more personal record, it speaks more about me”. This is almost normal, considering that Chaos is born from years of isolation. Also the cover of the album, with Fabri Fibra alone on a beach that recalls the film Galverston, seems to communicate the desire for a confrontation with himself first and foremost. Not that there is no lack of social criticism (listen in this regard Ugly son of) but the fulcrum of the album is clear just by starting the intro, in which you listen The sky in a room by Gino Paoli. In a rap scene where everyone competes to show themselves invincible, Fibra is not afraid to sing in Chaos: “It was the same life in the same place / The same thoughts every fucking day I felt bad inside I felt dead”. The youth crowds have passed for years now but the new ones are no less frightening. Maybe it’s just the same more powerful turns, like in a Japanese anime. To fight them, with bars that know how to deal with chaos, all that remains is the music.