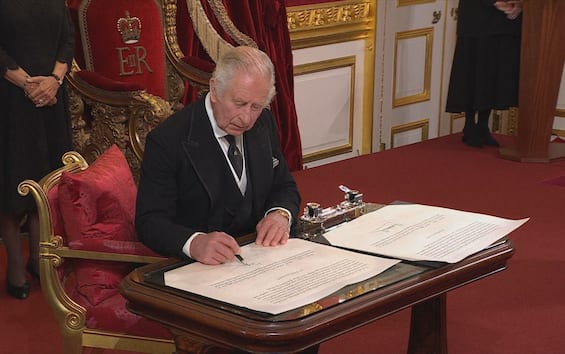 Charles III was formally proclaimed king this morning in the apartments of St James, in the Buckingham Palace complex, by the Accession Council, an institution called upon to certify the succession between one monarch and another in the United Kingdom. Present the queen consort Camilla and the heir to the throne William, in addition to the premier Liz Truss ea several former prime ministers. The ceremony takes place two days after the 96-year-old’s death Queen Elizabeth and the ipso facto ascent to the throne of his 73-year-old eldest son. It is the first time that a British coronation ceremony has been broadcast live on TV. (GOODBYE TO THE QUEEN. THE SPECIAL – LIVE UPDATES)

“My mother has set an example of love and service throughout her life,” the new King Charles III said in his speech during the oath. “My mother’s reign – he added – is unmatched in duration, dedication and devotion. I am deeply aware of the deep legacy and the great duties and responsibilities that now pass to me.” “I am deeply encouraged – continued the sovereign – by the constant support of my beloved wife” referring to the queen consort Camilla. “I will follow my mother’s example in supporting constitutional government and in seeking peace, harmony and prosperity for the peoples of these islands and the Commonwealth. I know that I will be supported by the affection and loyalty of the peoples of which I am. was called to be sovereign and that, in carrying out these duties, I will be guided by their elected parliaments. “

The ceremony took place in the absence of the new ruler, as tradition dictates. The ceremony was presided over by Minister Penny Mordaunt, in her capacity as President of Council within the current Tory government, alongside the top of the body represented by the heir to the throne William, the new Prince of Wales, by the queen consort Camilla, Prime Minister Truss, the Anglican Archbishops of Canterbury and York, the Minister of Justice Brandon Lewis, and some officials. Mordaunt began by formalizing “the sad news” of the death of “our magnanimous Queen Elizabeth II”. She then gave the floor to an auctioneer for the reading of the act of proclamation of Charles as new king, with all the attached titles, including that of “defender of the faith”. Act concluded with the invocation “God save the King”, repeated with one voice by those present. Eventually Mordaunt invited council members to move to the Throne Room to meet King Charles III.