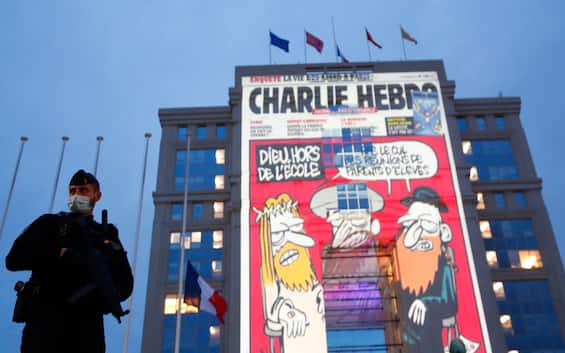 Eight years after the attacks, Charlie Hebdo certainly hasn’t stopped biting. This is demonstrated by the special issue on newsstands for this January 7, 2023: on the cover, a small group of mullahs in turbans penetrate the private parts of a woman. In bold it reads “Mullahs go back to where you come from”, a reference to the citizen protests that have been going on for months in Iran after the death of Mahsa Amini. “Charlie Hebdo hasn’t changed, he has continued to carry on courageous battles like this,” Philippe Val, former editor of the newspaper, tells us. Iran did not appreciate the French satire, accusing Paris of “crossing the line” by insulting political and spiritual leader Khamenei. The French foreign minister replied by reiterating that “freedom of expression exists in France, not the rest of blasphemy”. A foreseeable diplomatic tension, followed by computer attacks on the newspaper’s servers.

It is only the latest battle for freedom – of the press and beyond – carried out by the French satirical weekly. As already before 5 January 2015. Back then, it was some cartoons of Mohammed that triggered the reaction of two Islamic extremists, the brothers Said and Chérif Kouachi, who entered the editorial office armed with Kalashnikovs and killed 12 people, including journalists and illustrators, before fleeing and themselves killed by the police two days later. The attack was later claimed by the Yemeni branch of Al Qaeda, as was the parallel attack on a supermarket on January 9, 2015, in which four hostages and a policewoman were killed. The trial against the 14 alleged accomplices of the bombers began in September 2020 and ended in December 2020, except for two convicts who appealed, for whom the trial ended in October 2022 with the confirmation of the sentence .

What has changed eight years later

Eight years later the Charlie Hebdo office where the massacre took place has become something else. It houses the offices of the NGO Groupe SOS, which often receives the curious who want to “see live” the corridors seen in the images of the tragedy. The new editorial office is kept secret for security reasons. Just as the contacts of journalists and collaborators are protected. Director Riss lives under guard. A high price to pay for freedom of the press. On the other hand, threats to the editorial staff appear regularly: in 2020 a petition was launched by the French media to protect the editorial staff and its satirical charge.

Like every year, the commemoration of the victims of the attack will take place behind closed doors, in front of the former headquarters of the editorial staff, in the presence of the relatives of the victims, the mayor of Paris Anne Hidalgo and the Minister of the Interior Darmanin. A sober and intimate ceremony, but deeply felt.