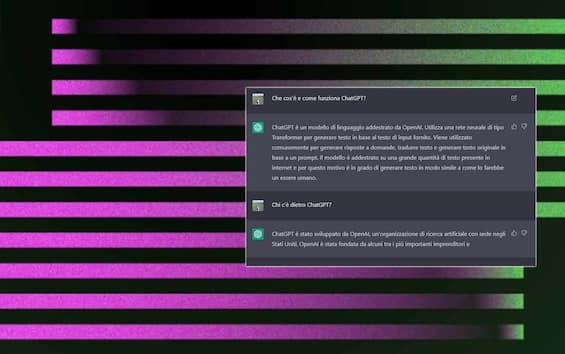 It is the best artificial intelligence prototype available for free on the web. ChatGPT is a text chat created by the OpenAI company able to converse and interact with users, learning and evolving day after day through conversations. There is a lot of talk about ChatGPT: just think that schools in many countries are banning its use for students who use it to do homework, research, translate, write texts or solve equations in seconds (we tried it ourselves by copying and pasting a Latin version: the translation arrives after less than 10 seconds). But in addition to the extraordinary accuracy – almost always – of the answers, what is behind it and how does what has been defined as the most advanced artificial intelligence we have available work?

Asking ChatGPT what ChatGPT is, the artificial intelligence replies that it is “a language trained on a large corpus of text to generate more text autonomously and answer user questions, using a machine learning technology called Transformer which allows him to understand the context of the text and generate appropriate responses”. ChatGPT can be asked for practically everything: it can be trained on a specific text to increase its accuracy, notions can be explained to it in order to enrich its database and it can be used to automate many writing tasks and create content quickly. Just to name a few: you can ask him – even given a very long text – to write a summary in 10 lines, to compose an essay on Dante, to create a nursery rhyme, to give advice on a marketing strategy, to explain difficult complex philosophical theories. Developed in Silicon Valley by a research group funded by prominent profiles, ChatGPT looks like a blank page and a text field where you can write whatever you want. In a matter of seconds the system feeds our question (it works perfectly in Italian too) and offers an answer. An answer to which, then, one can reply in a sort of practically infinite conversation. To understand what it is, how it works and what are the advantages and disadvantages of such an advanced artificial intelligence distributed free of charge, we asked for help from two industry experts: Giorgia Fortuna, PhD in Mathematics at MIT and partner of Machine Learning Reply ( company that has been working on artificial intelligence issues for some time and is studying the creation of humanoids, digital humans enhanced by a generative component), and to Andrea Boscaro partner of The Vortex and expert in digital marketing.

An artificial intelligence unlike any other

“ChatGPT – explains Fortuna – is the latest in a series of models that have started to become popular in the last year and is a generative model: it means that it is able to generate text starting from a question, a word, a string empty. And he manages to do it because he has seen everything that has been written in the past, he scans the net, he understands how words follow one another. So he doesn’t necessarily understand the context, but he knows that certain words follow one another in a certain way and, word by word, he is able to generate sentences, like we do”. “ChatGPT – adds Boscaro – is a set of technologies and features that allow us to take advantage of the abundance of information found on the net in order to be able to manage it more efficiently. This is an opportunity launched for individual web users, whether they are professionals, students or researchers, who can benefit from faster access to the information available on the web. A very important opportunity but one that must be tackled taking into account the system’s criticalities and the criticalities related to how this system can be used by other network users”.

How does ChatGPT give answers (almost) always appropriate

But how does ChatGPT respond in an almost always appropriate way and how can an artificial intelligence be trained? Giorgia Fortuna explains: “During the artificial intelligence training phase, human feedback is given to make the model understand which is the best answer to a question. So the model is not only trained to give an answer, and therefore complete the sequence of words, but it is also trained to understand, given a set of answers, which one is the best. And this allows you to manage the dialogue in a very realistic way”. During our (many) hours of testing we have experienced how ChatGPT has the ability to remember what a user has said or asked, gives users the opportunity to correct their answers, is trained to decline inappropriate questions and allows you to faster and – at least it seems to us – smarter what we already do on the net, such as a translation or a search. OpenAI, among other things, warns against responses that are “occasionally generated incorrectly” and those that may “occasionally produce harmful instructions or harmful content”. ChatGPT works well with current events that occurred up to the end of 2021. As highlighted by the Sky TG24 article asking artificial intelligence what are the similarities and differences between the attack on Capitol Hill on January 6, 2021 and that on government buildings of Brasilia a few days ago ChatGPT stated that “the attack on the government buildings of Brasilia was carried out by demonstrators who were dissatisfied with Bolsonaro’s policy” (obviously this is not true, the demonstrators were indeed supporters of the ex-president) .

“The Fox and the Future”

ChatGPT can also be used to create original texts (which opens up a huge copyright question mark). An authoring collective called Roy Ming used ChatGPT to create automated text from just a few inputs, without making any changes. And so the children’s tale “The fox and the future” was born, a story that wants to help the little ones understand, the collective explains, “that we shouldn’t be afraid of technology and how it can make the world a better place” . Even the illustrations are completely created by artificial intelligence: the authors have in fact used Midjourney, a system specialized in creating images starting from textual descriptions.

Beware of incorrect use of the software

Even cybercriminals seem to be very interested in ChatGPT: Check Point Software recently observed the first cases of people using the system to develop dangerous tools, asking for help with writing malicious code – yes, ChatGPT also helps with computer programming. Codes which, according to experts, are very elementary for the moment but which with machine learning – we add – risk becoming increasingly sophisticated. And the Privacy Guarantor recently recommended not to tell ChatGPT too much about us as the system can store global knowledge on hundreds of millions of people around the world and it is not clear how this personal data can be managed. And if Giorgia Fortuna warns against possible “toxic” conversations, which risk making the user enter “a negative stream”, for Boscaro one of the most important problems is that “the fact that ChatGPT always offers an answer does not train what critical spirit” that we should have when looking for information on the web. “And then undoubtedly – explains Boscaro – there are critical issues related to the fact that this abundance of new features risks making the creation of phishing systems much easier, so we must expect that the bar will also be raised with respect to methods with which various operators who act on the net to steal the personal data of unsuspecting users to deceive us will become even more sophisticated, and therefore we will probably still have to keep our antennas very straight”. And then there is the risk that this technology, knowing how to invent and invent well, will be increasingly linked to the phenomenon of fake reviews.

The future of artificial intelligence

ChatGPT is coveted by most of the world’s software houses. As the same artificial intelligence writes to the question “what is the future of ChatGPT”, this “could be used in a wide range of applications” and its use “could be extended to fields such as medicine, finance, science and content production”, thus helping to solve “complex problems”. And the new frontier will certainly be audio and then also video. Microsoft, for example, presented a model called Vall-E educated with over 60,000 hours of speeches and words capable, given three seconds of spoken audio, of faithfully reproducing the tone and cadence of a human being, with a naturalness in pronunciation and similarity to the original voice that those who have tried it assure there is nothing like it in the world. there are many systems capable of creating the so-called deepfakes: videos in which the figure, mimicry and voice timbre of famous people are perfectly imitated, with the consequence that one can practically make one say d all to all. “Information – concludes Boscaro – will be increasingly available, the way to be able to communicate online will be increasingly abundant and more efficient. The problem remains that the more information there is, the more there is a need for someone to ‘direct’ the information to be able to screen it, to be able to direct it. As Seneca said ‘there is no favorable wind for the sailor who does not know where he wants to go’ ”.

The summary of this article

Ah, this is the summary of the article you just read according to ChatGPT:

ChatGPT is a text chat created by the OpenAI company that can converse and interact with users, learning and evolving day after day through conversations. It uses a machine learning technology called Transformer which allows it to understand the context of the text and generate appropriate responses. It is used to automate many writing tasks and create content quickly, such as summarizing a text, composing a term paper, creating a nursery rhyme, giving advice on a marketing strategy, explaining complex philosophical theories. It is presented as a blank page and a text field where you can write whatever you want