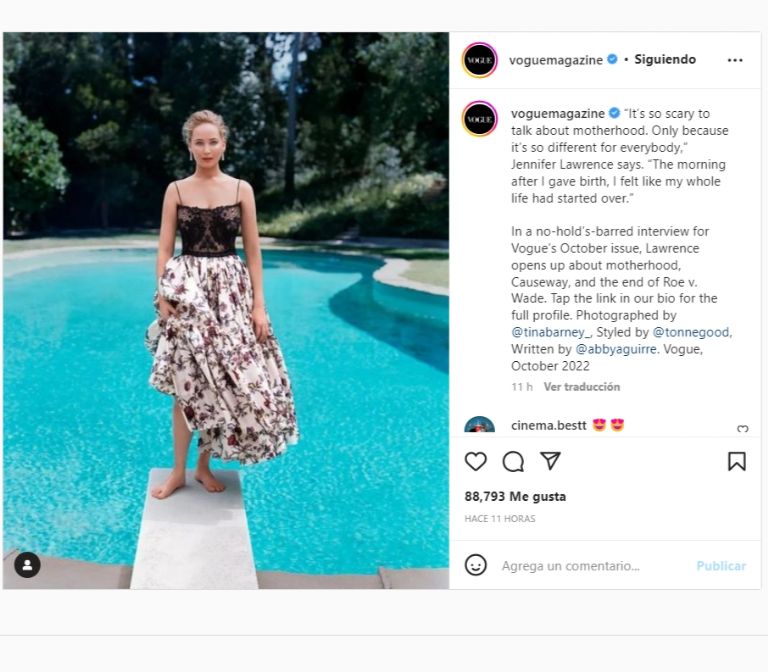 Jennifer Lawrence revealed the name and gender of her first child after previously expressing her desire to keep that part of her life private.

Jennifer appeared on the October 2022 cover of fashion and took the readers to his house beverly hills while talking about the recent addition to his life.

Jennifer married Cooke Maroney in 2019, a year after the two started dating. In 2021 she revealed her pregnancy, and in February the news of the birth of her first child was known. Jennifer and Cooke.

However, Jennifer has kept quiet about her son so far.

Jennifer confirmed to Vogue that he had a son and revealed his name.

He shared that he had a son named Cynamed after the postwar American painter Cy Twombly, one of Cooke’s favorite artists. Cooke is an art dealer, so the name is near and dear to his heart.

Jennifer Lawrence poses by the pool and talks about motherhood

Jennifer posed by the pool as she discussed her upbringing in Kentucky and the political drama with her family.

She also explained how her life instantly changed after giving birth.

Jennifer revealed: “It is so scary to talk about motherhood. Just because it’s so different for everyone. If I say, it was amazing from the beginning, some people will think, it wasn’t amazing for me at the beginning, and they will feel bad. Fortunately, I have many girlfriends who were honest.”

Jennifer continued: “The morning after giving birth, I felt like my whole life had started all over again. Like, now is the first day of my life. I just looked. I was so in love. I also fell in love with all the babies everywhere.”

The actress pondered out loud how motherhood would affect her acting choices.

She joked: “A lot of my movies in the past have been about my mother, my childhood. I wonder what will happen now that I will witness someone else’s childhood.”

Jennifer Lawrence expressed her desire to protect her son

Jennifer told Vanity Fair last year that she wanted to keep her son out of the spotlight and refused to reveal the gender.

She said: “But every instinct in my body wants to protect their privacy for the rest of their lives, as much as it can. I don’t want anyone to feel welcome in their existence. And I feel like that starts with not including them in this part of my job.”

Even though Jennifer revealed her son’s name and gender, she can still protect her son and keep that part of her life out of the media.