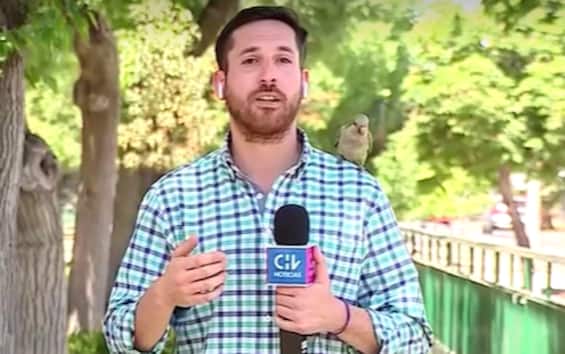 From words to deeds. A Chilean journalist talks live on TV about a phenomenon of petty crime on the rise in the capital Santiago de Chile, the robberies in the villa, when all of a sudden he himself becomes the victim of a somewhat bizarre theft given that the thief in question is a parrot . In the one-minute video shot by the Chilevision channel, the cute bird is seen resting on the shoulder of the anchor Nicholas Krumm who first pretends nothing has happened, and continues to speak into the breaking news microphone. After a few seconds, seeing that the parrot does not go away, the journalist tries in vain to chase it from the scene, he even reaches out to ask the operators for help. That’s when the bird springs into action, steals the earpiece stuck in Krumm’s left ear with its beak and takes off with the booty.

The thief “flies away” without stolen goods

A somewhat anomalous unexpected, shot by the camera that never detaches the lens from the scene. At one point a cameramen is also framed trying to catch the parrot to retrieve the headset, but by now it is too late. The thief “flies away” but without stolen goods. The reporter will then tell local media that the device was found on the ground. An attempted robbery ended badly for the thief perhaps desperate for food. While it went very well on Chilean TV which, with the off-program, has depopulated on social media. In fact, the video quickly went viral, accumulating over 169,000 views on Twitter.