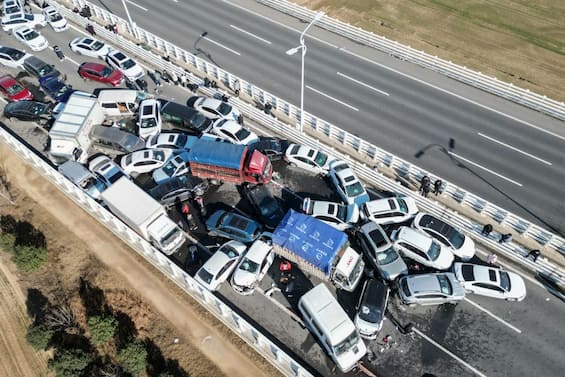 A staggering number of cars, jammed together, were involved in a traffic accident last night, around one o’clock, in east China’s Jiangxi province. There are 19 victims and 20 injured, transported to hospital, in the tragedy, perhaps due to the weather conditions, into which an investigation has been opened by the authorities. According to the local newspaper Jimu, the mega accident was caused by a truck which, for reasons not yet clarified, ran over a funeral procession. Witnesses say the truck hit the rear of the procession, stopping only behind the hearse.

An hour after news of the accident broke, the Nanchang Traffic Police issued warnings to motorists that there was “fog” in the area. “Visibility while driving is precarious. There is poor visibility, which can easily lead to traffic accidents,” police warned, “please pay attention to the fog lights. Slow down, drive slowly, keep a safe distance from the car that precedes, avoid pedestrians and do not change lanes or go forward”. Traffic accidents are common in China due to insufficient safety controls. The most serious accident in the recent past dates back to last September, when 27 people died in the crash of a bus carrying a group destined for quarantine in the province of Guizhou, in the south-west of the country.