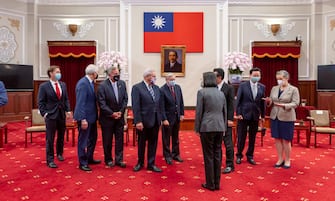 Tensions between Washington and Beijing. Reunification with Taiwan “will happen”, assures China, expressing its anger for the visit of the US Senate delegation to the island (in the picture) which it considers an “inalienable part” of its territory. Foreign Ministry spokesman Zhao Lijian went so far as to threaten the adoption of “effective measures to protect the nation’s sovereignty and integrity”, while expressing Beijing’s “firm opposition” to any official exchange between Taipei and Washington

Taiwan, China deploys air and naval patrols after the visit of US senators

Specifically, they were deploy military ships, destroyers and six jets as a show of strength against “US misbehavior and tricks that are utterly futile and dangerous. Those who play with fire will get burned,” cautioned Shi Yi, spokesman for the Eastern Theater Command of the Chinese Armed Forces. Pictured: Taipei

It was to rekindle the tensions the visit to Taiwan, on April 15, of six American senators led by the president of the Foreign Affairs Commission, Democrat Bob Menendez, and Republican Lindsey Graham, who were welcomed by President Tsai Ing-wen. China has never controlled democratic Taiwan, but has promised to take possession of it by force if necessary. It should also be remembered that Taiwan’s security has global consequences as the island produces about 90% of high-end semiconductorsMenendez warned

The rivalry between China and the United States, which sees Taiwan as the most intricate knot to unravel, also extends to Beijing’s growing role in Asia-Pacific. There is a weight on the regional framework the pact announced last September between the United States, Great Britain and Australia on nuclear submarines that China criticizes as “a NATO in the Pacific

The United States and Australia, on the other hand, have expressed concern about the proposed security agreement between Beijing and the Solomon Islands – with which China has established diplomatic ties in 2019 – which could increase China’s military presence in the region, according to a draft of the agreement. The latest criticism of Beijing comes from the CIA director, according to which China intends to replace the United States in the Pacific, and Beijing is a “silent partner” of Moscow in the invasion of Ukraine. Pictured: Taipei