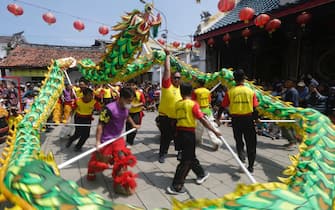 In different cities of the world it is celebrated todaySunday 22 January, “Chun Jie”: the Spring Festival or Chinese New Year or Lunar New Year. The date coincides with the second new moon after the winter solstice and marks the beginning of the year of the Water Rabbit (in the photo, the celebrations in Indonesia)

Chinese New Year, 2023 is the year of the Water Rabbit: curiosities and characteristics

Not only in China, but in several countriesin the night people took to the streets for greet the end of the year of the Tiger and welcome the new year. The celebrations continue today

Chinese New Year, all the news

2023 is the year of the Water Rabbitrespecting the order in which the 12 animals of the Chinese horoscope presented themselves before Buddha: the rat, the ox, the tiger, the rabbit, the dragon, the snake, the horse, the goat, the monkey, the rooster, the dog and the pig

The Rabbit, according to the Chinese horoscope, is a sign associated with a calm, gentle and elegant animal. It also stands out for another key feature: the sense of responsibility. Those born under the sign of the Rabbit do not like contrasts and this animal is considered a rather lucky sign. These characteristics describe a year that should be one of serenity

Tradition has it that at this time of year we go home to spend the holidays with your family: trains, planes, buses and means of transport of all kinds are literally stormed

Million of people in China, Asia and communities abroad they celebrate with fireworks, red lanterns, prayers in temples and laid tables in homes

Children are also at the center of the party, who receive gifts from relatives and friends and red envelopes with coins inside (auspicious). Always to favor luck and peace can not miss the fireworkswho keep evil spirits away with noise, and red lanternsbecause the “evil” hates red

The Chinese New Year has similarities with our Christmas – above all for the exchange of gifts), but also with Easter (traditionally imposes to clean the house from top to bottom with meticulousness). The family dinner is essential: constitutes the moment of greatest cohesion between the young and old generations engaged in the preparation of 12 dishes to represent the 12 animals of the Chinese zodiac

The entrances to the houses are adorned with paper decorations representing the ideogram “fu” and the double “gao”: hung upside down, they express the wish and the hope of getting luck, wealth and happiness in the new year

The house must be a mirror: even the most hidden corners must be cleaned, heavy wardrobes, beds and all the furniture are moved to sweep away every speck of dust or dirt that could ruin the party or bring bad luck in the year that begins

As for the foodon the eve of preparing the Niangao: a steamed rice cake that will be the star of the holidays. Then the dinner. First of all i ravioli: some copper coins, gold or silver grains, small precious stones, or chestnuts, peanuts or dates are added to the filling, and whoever gets the “special” filling will be lucky in the new year. At the center of the laden table stands a huge fish, whole, to symbolize family unity. Many other dishes are served, also in respect of the traditions of each area

According to tradition, the new year begins with the ringing of a bell and everyone takes to the streets to set off firecrackers and to watch fireworks: the noisiest and most colorful that there may be to frighten and drive away evil spirits. The Chinese wear party clothes and children in particular have flamboyant clothing, with very bright and cheerful colors

The festivities in Manila

Tradition has it that you go first to wish the elders of the family, then distribute to children coins in small red paper envelopes: red is a symbol of vitality, joy and luck and dominates the banners and all the decorations used for the holidays. But it is also the color that keeps evil spirits away. With those coins the children are supposed to buy the spirits of evil, helping them to transform themselves into forces of good

Cities fill up with long dragons and lions dancing in the streets: made of colored paper or fabric, yellow or red or even green (a color linked to agriculture). With the launch of the very noisy firecrackers, the dragons also slip into the small streets and stop in the squares, always to scare and keep evil spirits away. The dragon symbolizes good luck and prosperity, so much so that it even slips into shops to bring good luck

The celebrations in Myanmar

As mentioned, the Lunar New Year in the Eastern tradition marks the beginning of the new year: a holiday that is celebrated not only in China, but in many Far Eastern countries and their communities abroad

The traditional Chinese calendar is lunisolartherefore based on the calculation of the movements of the Moon and the rotation of the Earth around the Sun. The months begin in conjunction with the new moon, and the New Year coincides with the second new moon after the winter solstice: the date, therefore, varies every year

The Lunar New Year celebrations end with the Lantern Festival: on this occasion, tradition calls for the population to leave the house for a night walk with a lantern in hand

In addition to prayers, there is no shortage of prayers in the temples food offerings

Chinese New Year 2023, fashion celebrates the year of the rabbit