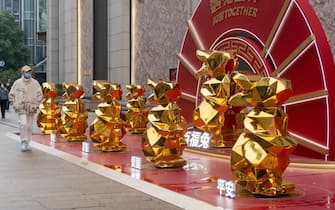 will be theyear of the rabbit of water which should herald a year of peace. In general this animal in China it’s seen very positively indeed. But it does not end here: this year we celebrate the “water rabbit” and this feature amplifies emotioncalmness and sometimes the indolence of the small animalwhich is already peaceful on its own

Chinese New Year everything you need to know

In China the Lunar New Year (or Spring Festival) it’s time most magical and awaited of the yearcomparable to holiday season of Western countries. This year we will celebrate the January 22ndwith well 16 days of celebrations ranging from New Year’s Eve (therefore January 21st) to February 5th

In this time Chinese families respect all the most ancient traditions: from the inevitable “dinner” to offers for gods and ancestorsfrom prayers addressed to Buddha to the big cleaning “of spring” to free the house from dirt of the old year

The chinese name of the new year translates as Spring Festival. It is called that because it falls during the first of the 24 solar terms of the traditional calendar of Chinacalled Lìchūn, which means precisely “early spring”

There Spring Festival it is also celebrated in many other Asian states such as Malaysia, Singapore, Philippines, Vietnamas well as in Chinatown of all the world

There Spring Festival has a history of over 3,000 years and its origin is closely linked to beliefs in ancient deities to whom sacrifices were offered during the changing of the seasonal cycles. The date that marks the beginning of the year has been changed several times on base with the succession of dynasties up to that of Han which he first promulgated the lunar calendar still used today

The holiday season lasts 16 daysbegins on New Year’s Eve and ends with the Lantern Festival. The Chinese people will officially be able to enjoy a 7-day holiday (January 21 to 27), from the day before until the sixth day of first lunar monthwhile schools and some factories will close throughout the duration of the period

There lantern festival, as well as being the holiday that marks the official end of the New Year period, a bit like the our Epiphanyalso corresponds to the first full moon night of the Chinese calendar and marks the arrival of Spring. Full moonaccording to Chinese tradition, is family reunion symbol

In Italy there are many places that organize small events, but in Milan the Chinese New Year Parade. After 2 years of detention due to the pandemicthis year the event that is usually held is back always on Sundayand that therefore in the 2023 exactly coincides with the Chinese New Year. The dragon parade will take place at‘Arch of Peace and not in Via Paolo Sarpi like all the other years

The Red Lanterns are rekindled in Milan