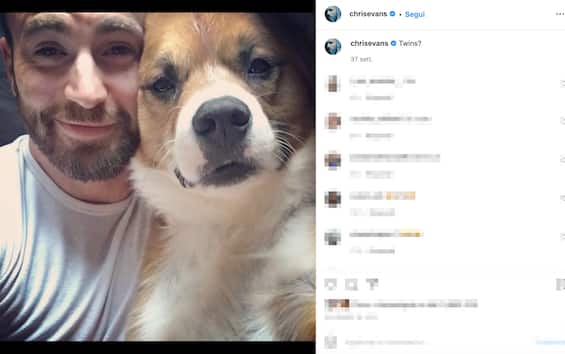 Chris Evans said during an interview with the US magazine Extra that she would never go out with someone who doesn’t like dogs.

The Hollywood star stated that the conditio sine qua Not dating someone on a romantic level is to love four-legged friends.

The star of “Captain America: The First Avenger” as we know is very fond of his dog, Dodger. But an important criterion for him is that a potential partner appreciates not only his Dodger but equally all dogs, as he confessed to the magazine. Extra.

It all started with the interviewer, who asked him if Dodger’s opinion about his love life is important. Chris Evans at that point replied: “Dodger is probably a difficult indicator because he likes everyone … I think the opposite is more important,” said the actor, adding (to dispel any doubt): “You have to make sure that the person you are interested in love dogs “.

Words of commendation about his dog

It’s no mystery that Chris Evans is an AOC dog lover. He loves all dogs, in general and without distinction, however his great love remains his hairy one, the now very famous Dodger.
Il divo, 41, during the interview with Extra he insisted that his big dog is “such a good dog” and that he always does what he is told.

His words were: “I hate, you know, bragging a little bit, but he’s such a good dog!”
Chris Evans is an absolutely devoted Dodger, whom he talks about like this: “He’s so nice and ready for anything.”

Anyone who follows the Hollywood star on Instagram needs no introduction related to his dog, as he gives it frequently himself … Dodgers is omnipresent in almost every post or story of his owner.

Evans named his dog after a character from the animated classic “Oliver Company”. He explained: “When I first saw Dodger, I said to myself, ‘Oh, it kinda reminds me of the Dodger from’ Oliver Company ‘. It was just a random thought … Then […] I couldn’t get the Dodger out of my head ”.

Chris Evans is looking for a partner

The actor has been collecting several blockbusters lately (one above all is Netflix’s blockbuster film, “The Gray Man”, the most expensive film in the history of the streaming platform, in which Chris Evans is Ryan Gosling’s antagonist).

Evans has been officially single since 2018, however he recently admitted that he had focused on finding a partner. As far as we know, what he would be looking for is a partner, as Chris Evans has always dated women.

But the actor said he wanted to “find a partner, you know, someone you want to live with. I mean, he listens to you, he loves what you do. Is fantastic. I put my all into it ”, so these characteristics could be valid for any genre. Let’s say that the English language, like the one that the American actor speaks, does not make much distinction between gender, so it is not known until Evans has finally found his sweetheart and is ready to introduce her to us (provided that the sweetheart is not Dodgers, because we already know that, and how).

But if on the one hand nothing more is known about Chris Evans’ selection criteria in terms of gender, on the other hand the certain thing is that any candidate for the selection must absolutely have an essential requirement: he must be a dog lover. And also cinephile, given that we are talking about one of the most famous Hollywood actors of today …

Below we show you some of the many posts attesting to Chris Evans’ great love for dogs. Dodger (his) of him first of all but also many others, such as the delightful puppies with which he was immortalized about two months ago on Instagram.