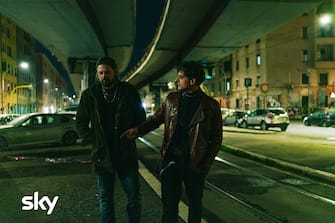 Davide walks into a bar whose owner has a debt of 10 thousand euros with his father Lino. He asks to pay the debt or, alternatively, to give him keys and documents from the bar. The bartender points a gun at him, Davide backs up and goes out. But outside is Christian, who hits the bartender throwing him against the window and then breaks his arm

WATCH THE VIDEO: Christian, episode 1: Christian and the boss Lino

After fixing the bartender, Davide and Christian go home. The two have a long conversation about the harms of sugar

Christian, the cast of the tv series. PHOTO

After a long walk, the two arrive in the City-Palace: a huge complex of public houses completely controlled by the boss Lino, with huge common balconies that overlooked dilapidated apartments.

Christian, everything you need to know about the TV series

Davide and Christian go to the Palace-City bar where they meet the rest of the gang. Here we discuss women’s football and men’s and women’s activities

Christian, the face to face between Edoardo Pesce and Claudio Santamaria

Here he meets Lino, the boss, a sort of stepbrother for him

Christian, discovering the characters of the TV series

Here he meets Lino, the boss, a sort of brother for him. Lino is intent on taking care of the lambs and explains to Christian what happens when they are afraid and the importance of making sure that they trust you until the moment you slaughter them.

During an evening in a club, Christian suddenly feels a sharp pain in his hands. For him it is the second episode of its kind after a first one that happened while training with a punching bag

Returning home, Christian finds Rachel lying in the elevator. He tries to wake her up, but her friend and neighbor looks like she’s dead, the victim of a heroin overdose. As soon as Christian touches her arm with his hand, however, Rachele revives as if by a miracle

The second episode opens with a flashback. The year is 1984, a priest arrives in a hospital with a camera, enters a room where he finds a girl and begins to interview her while he films her. The young woman is called Benedetta, she seems to be pregnant, but she denies having had sexual intercourse

Back to the present. Christian woke up with the stigmata, even though he still doesn’t know what the wounds on his hands are. Lino arrives home, brings an electronic armchair for Italy, Christian’s mother. The boss, however, learned that something was wrong, that Christian began to miss out and there was an accident: a Roma who had to be evacuated from an apartment slipped from his hands from the third floor, sustaining serious injuries.

Matteo offers Rachele 200 euros in exchange for the story of her experience, how she felt when she came back to life

In exchange for her testimony, he also promises her a substance capable of saving her life

Meanwhile, Christian continues to have difficulties at work. He had new crises while trying to intimidate an African inside one of the apartments in the City-Palace. So he asks Davide to give him the code to access the room where Lino has hidden all the weapons

Taking the gun, Christian goes back to the African’s house, but here he is caught by another attack, he loses control of the gun and is taken hostage

Lino and his gang go to the place. The boss tells the man barricaded in the house to open the door

Once inside, Lino has a long conversation with the man. He then beat him up to get him to leave the house

The next day Lino goes to Christian. He cannot forgive him for violating the rule that prohibits the use of weapons in the City-Palace, so he forces him into exile.

Accompanying Christian is Penna, who has an unfinished business with him and sets a trap for him