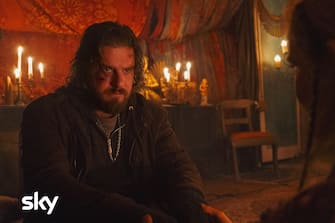 The Sinti want to cut off his hands to punish him, but Christian begins to speak in their language. At that point, a little girl with mystical powers asks to be able to speak with him

Christian, the photos of the first two episodes

Rachel, meanwhile, has completely detoxified but is struggling to reintroduce into society due to the prejudices against her

Christian, the funniest moments on the set. VIDEO

Christian sends for Rachel and has her taken to the nomad camp to talk to her about her powers and what happened a few nights before, when he resurrected her.

Tomei has just received a visit from Sergio and Lino’s other henchmen, who have brought him a dead snake, when he receives another visit

Christian, the face to face between Edoardo Pesce and Claudio Santamaria. VIDEO

Behind the door are Rachele and Christian

Christian, everything you need to know about the Sky Original TV series

The two enter and ask Tomei to visit Christian’s hands

Christian, authors and protagonist tell the origins of the series. VIDEO

Before leaving, Christian decides to take the dead snake, convinced that it is linked to the prophecy recited by the young Sinti. Tomei asks him for 200 euros

At Rachel’s house, Christian tries to resurrect the snake

At the moment, the practice seems to be unsuccessful, but a few hours later the snake revives and leaves the house

Christian, discovering the characters of the TV series. VIDEO

After talking to Davide, Christian convinces him to try his powers on his mother, who has been in bed and connected to machines for 15 years, after being seriously injured in an ambush with a gun. Initially the attempt seems to worsen the condition of the woman, but then she wakes up and returns to live a normal life

Christian, the cast of the tv series. PHOTO

Lino talks to Christian, thanks him, but asks him to keep it between them

Meanwhile, Penna receives a phone call and rushes to Sergio’s house, to find him strangled by what looks like the same python he had killed and brought to Tomei.

Christian tells Rachel that he intends to go back to his job as a thug, but Rachel convinces him to use her gift to help people. Getting paid

This is Virginia, a transsexual prostitute with cocaine problems

After an initial reluctance and subsequent quarrel with Virginia, Christian takes her hands and cures her of her drug addiction

During a punitive expedition against a dealer who owes Lino 45,000 euros, Christian has a new crisis. His hands begin to bleed and he goes to the bathroom leaving Stefano alone with the dealer. Stefano exaggerates with the blows reducing the man to death. The two and Lino take him to Tomei, who says he can’t cure him

Lino decides to kill the dealer and get rid of the body. Christian tries to intervene, proposing to try to heal him, but Lino is determined to keep the secret and suffocates the man

Returning home, Christian finally meets Matteo, who has visited Tomei. The vet, lying and for a large fee, told the Vatican postulator that he was the one who injured Christian’s hands to simulate the stigmata.

The two have a heated confrontation. Matteo accuses Christian of fraud, Christian defends himself, the two almost come to blows when Italy arrives, completely cured of Alzheimer’s to the extreme amazement of both Christian and Matteo

Matteo, who had already known Italy by understanding its conditions, begins to believe that Christian may really have mystical powers

The postulator meets Italy again in church and goes with her to the bar to talk to us. Italy reveals the truth about Christian: she is not her son, she adopted him and resold him from the hands of a stranger who had warned her that one day someone would come from the Vatican to ask her about him

Heard the story of Italy, Matteo goes to the abandoned hospital where the young Benedetta gave birth to Christian