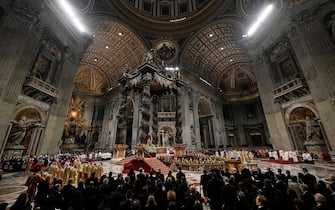 Christmas is celebrated on December 25th and there are different traditions that, in every country, are linked to this date and to the night before. In Vaticanfor example, on December 24 there is mass with the Pope. Here is a tour of the world with the most beautiful images of the celebrations

Christmas Mass, Pope Francis: “I think of the children devoured by wars and poverty”

Bad weather, the coldest Christmas in the last 40 years in the US. PHOTO

Merry Christmas 2022: the most beautiful phrases, images and GIFs to send on WhatsApp

Christmas Eve mass at KievUkraine, in the monastery of St. Michael

War in Ukraine, Christmas in Kiev between air raids and electricity shortages. VIDEO

Many nativity scenes around the world. This one, made of plastic bottles, is in Poland (in Biale Blota)

The procession with the birth of Jesus a Istanbulin Turkey

A crib in Sri Lankain Columbus

On Christmas Eve in the city of Chennai, in India

A crib a Flyin Russia

A child in a Santa suit a Gaza city

Then there are those who celebrate Christmas in a less conventional way: a Genevafor example, Christmas Eve is celebrated with a dip in the water dressed as Santa Claus

TO Belgradein Serbia, is celebrated with a motorcycle ride dressed as Santa Claus

To Athensin Greece, the night before is celebrated by releasing the lanterns into the sky

TO BudapestHungary, a bridge lit up for Christmas

On the streets of PamplonaOlentzero, the Basque version of Santa Claus, is brought to Spain on December 24th

How to protect Christmas: from photos on social media to greeting messages, risks and advice