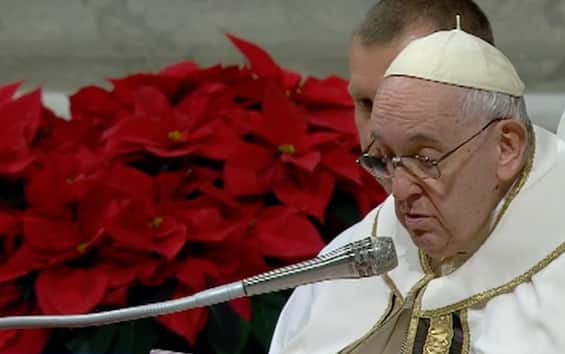 “After many Christmases celebrated with decorations and gifts, after so much consumerism that has shrouded the mystery we celebrate, there is a risk: we know many things about Christmas, but we forget its meaning”. Pope Francis, during his homily during Christmas mass, dedicated his first words to children: “Even this Christmas, a humanity insatiable by money, power and pleasure has no place, as it was for Jesus, for the smallest , to so many unborn, poor, forgotten. I think above all of the children devoured by wars, poverty and injustice. But Jesus comes right there, a child in the manger of waste and rejection. In him, child of Bethlehem, there is every child. And there is an invitation to look at life, politics and history through the eyes of children”. The Basilica is full. There are seven thousand faithful present but at least three thousand people – according to Vatican sources – are following the celebration also from the front via giant screens. Christmas mass in St. Peter’s was not so crowded since before the pandemic.

Pope: “How many wars, men hungry for power and money”

The Pope looks at the manger, where Jesus was born, and underlines that “it is used to bring food close to the mouth and to consume it more quickly. It can thus symbolize an aspect of humanity: the voracity in consuming. Because, while the animals in the stable consume food, men in the world, hungry for power and money, also consume their neighbors, their brothers. How many wars!” the Pontiff commented in his homily. “And in how many places, even today, dignity and freedom are trampled on! And always the main victims of human greed are the frail, the weak”, added the Pontiff.

God has embraced our condition and our poverty and “he has not loved us in words, he has not loved us in jest! And therefore, he is not satisfied with appearances. He does not want only good intentions, He who became flesh. He who was born in the manger, he seeks a concrete faith, made up of adoration and charity, not of gossip and exteriority”, the Pope said again in his homily at Christmas Mass. “He, who lays naked in the manger and will naked on the cross, he asks us for the truth, to go to the naked reality of things, to lay excuses, justifications and hypocrisies at the foot of the manger. He, who was tenderly wrapped in swaddling clothes by Mary, wants us to clothe ourselves with love. God does not want appearance, but concreteness. Let’s not let this Christmas go by without doing something good “,” in his name let us revive a little hope in those who have lost it “.

Pope: “It really isn’t Christmas without the poor”

Pope Francis then looks at the poverty in which Jesus chose to be born and warns that “it really isn’t Christmas without the poor”. “And the first person, the first wealth, is Jesus. But do we want to be at his side? Do we draw close to him, do we love his poverty? Or do we prefer to remain comfortable in our interests? Above all, do we visit him where he is, that is, in the poor mangers of our world? He is present there. And we are called to be a Church that adores the poor Jesus and serves Jesus in the poor”. The Pontiff admits that “it is not easy to leave the warm warmth of worldliness to embrace the bare beauty of the grotto of Bethlehem, but let us remember that it is not really Christmas without the poor. Without them we celebrate Christmas, but not that of Jesus. Brothers and sisters , sisters, at Christmas God is poor: may charity be reborn!”.