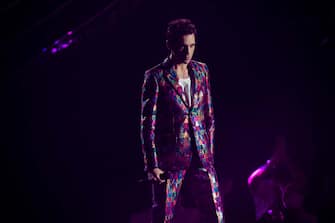 Mika is one of the most popular artists on the pop music scene. In the photo he is on the stage of the Assago Forum for the final of X Factor 2021 where he played the role of the judge (one of the most loved of the talent).

Christmas with Mika, the concert on Sky Uno

THE look of Mika in recent years they have strongly conquered the Italian public, and beyond. The chic and whimsical style of the singer Lebanese, naturalized British, has always aroused great admiration

Mika concert in Versailles in the magic of the Opera Royal

One of songs by Mika most famous was certainly the one that made him famous all over the world: Grace Kelly, which has jumped to the top of the charts around the world. At that time the young Mika he loved to dress simply and cleanly but had a clear French imprint

The fashion special of Sky tg24

Mika’s early outfits clearly showed that the singer had style to spare, without wearing anything extravagant or unusual.

Mika makes peace with his identity, his name is Michael Holbrook

Today Mika dares with very sophisticated and couture creations, which not everyone can show off with the same pride

All the news about Mika

Tartan and velvet are among his most loved and flaunted must-have fabrics, just as he has shown his love for marine t-shirts and designer polo shirts.

Milan Fashion Week, the men’s collections bring us back in presence

He loves narrow ties, when he opts for more elegant suits, and ton sur ton combinations

Ties, the charm of a timeless accessory

He has a clear passion for i cigarette pants, rather adherent and slightly tighter on the ankles, perfectly suited to her slender physique

How to dress for Christmas, men’s and women’s fashion: the 18 best outfits for the holidays. PHOTO

His tuxedo jackets and blazers are always embellished with special details

Among must have accessories, which he almost never gives up, there are suspenders of every color and kind, hats, especially the bowler hat, maxi scarves and foulards with multicolor prints

Another garment that has become the singer’s symbol is the dress, which has always given man charm and elegance. Mika does not like to wear the suit only for formal occasions, but on the contrary, she often uses it while still trying to adapt it to different contexts