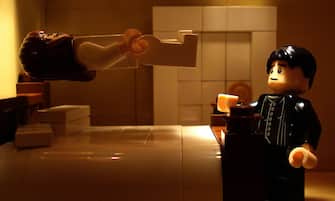 The Exorcist is a 1973 film directed by William Friedkin and based on the novel of the same name by William Peter Blatty, who also wrote the screenplay for the film.

Linda Blair, how the little girl in the film The Exorcist has changed

Raging Bull is a 1980 film directed by Martin Scorsese. It is one of the most important works born from the collaboration between the director Scorsese and the actor Robert De Niro, as well as one of the director’s own historians. Inspired by boxer Jake LaMotta’s autobiography, Raging Bull: My Story, adapted by Paul Schrader and Mardik Martin, the film was shot almost entirely in black and white.

Raging Bull, the secrets of the film

Shining (The Shining) is a 1980 film directed by Stanley Kubrick and co-written by him with Diane Johnson. In the cast Jack Nicholson

Shining, the secrets of the film

Il Padrino (The Godfather) is a 1972 film directed by Francis Ford Coppola, the first film in the trilogy of the same name signed by the director himself and starring Marlon Brando with Al Pacino, James Caan, Robert Duvall, John Cazale, Richard S. Castellano, Gianni Russo, Talia Shire and Diane Keaton

Will there be a fourth Godfather? How Coppola created the other three films, between takings and slings

Scarface, the secrets of the movies

The best films of Roman Polanski

All the news on LEGO

Sucker Punch is a 2011 film written, produced and directed by Zack Snyder.[2][3]

Casablanca is a 1942 film directed by Michael Curtiz and starring Humphrey Bogart,

Pulp Fiction is a 1994 film written and directed by Quentin Tarantino and starring, among others, John Travolta, Samuel L. Jackson, Uma Thurman and Bruce Willis.

Raiders of the Lost Ark is a 1981 American adventure film by Steven Spielberg and written by Lawrence Kasdan, based on a story by George Lucas and Philip Kaufman, as well as the progenitor of Indiana Jones’ cinematic tetralogy. (played by Harrison Ford)

The Silence of the Lambs is a 1991 film directed by Jonathan Demme, starring Jodie Foster and Anthony Hopkins.

The Big Lebowski is a 1998 film directed by Joel Coen. Featuring the writing and direction of the Coen brothers and a very rich cast that includes Jeff Bridges, John Goodman, Steve Buscemi, Julianne Moore and John Turturro

Back to the Future is a 1985 film directed by Robert Zemeckis and starring Michael J. Fox and Christopher Lloyd.

Agent 007 – License to Kill (Dr. No) is a 1962 film directed by Terence Young. This is the first chapter of the series dedicated to the British secret agent James Bond

A Clockwork Orange is a 1971 film written, produced and directed by Stanley Kubrick.

Singin ‘in the Rain is a 1952 film directed by Stanley Donen and Gene Kelly, starring Gene Kelly himself

Gone with the Wind is a 1939 film directed by Victor Fleming and produced by David O. Selznick.

Modern Times is a 1936 US film written, directed and starring Charlie Chaplin.

The good, the bad and the ugly is a 1966 film directed by Sergio Leone.

Billy Elliot is a 2000 film written by Lee Hall and directed by Stephen Daldry, inspired by the true story of dancer Philip Mosley

Blue Valentine is a 2010 American sentimental drama written and directed by Derek Cianfrance. The film premiered at the 26th Edition of the Sundance Film Festival. The film was written by Derek Cianfrance, Cami Delavigne and Joey Curtis, while Michelle Williams and Ryan Gosling played the lead roles as well as being the film’s executive co-producers.