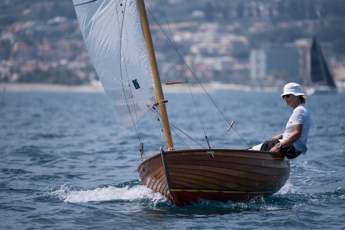 The Classic 12 ‘Dinghy Trophy, now in its twentieth edition, made its debut last June 4th and 5th at the Circolo Nautico Sambenedettese in San Benedetto del Tronto (AP). Fifteen participating boats, all built in wood and launched between 1956 and 2021. Two races held on Saturday alone, characterized by summer temperatures and light breezes up to 6/7 knots of intensity. The two scheduled races on Sunday were instead canceled due to the strong wind.


The third and penultimate stage of the Trophy was won by Fabio Mangione (ITA 2408 – Yacht Club Italiano) aboard Samurai, a 12 ‘Dinghy launched in 2021 by the Como shipyard Leopoldo Colombo. Mangione won both races. Followed by Gagà, another Dinghy 12 ‘from Colombo in 2008, by Stefano Bagni (ITA 2210 – Unione Velica Maccagno) and finally Moby Dick’s Baby by Paolo Alfonso Sada (ITA 2251 – Yacht Club Italiano), launched in 2010 by the Ernesto Riva shipyard. .

Participation in the Classic 12 ‘Dinghy Trophy is open only to wooden boats (including mast, boom and peak) and therefore excludes fiberglass constructions and “mixed” fiberglass and wood constructions. The Trophy is a national circuit on four stages in different locations on the peninsula, included in the dense annual calendar of the 12 ‘Dinghy regattas which includes over 100 events, distributed from January to November.

The current Secretary of the Dinghy 12 ‘Class, for the sixth consecutive term, is the Genoese Francesca Lodigiani, while the head of the Classics Section is the Milanese Andrea Cito Filomarino, member of the Board of Directors. This historic derivation, born in 1913 from the pencil of the Englishman George Cockshott, next year is preparing to celebrate not only its first 110 years of life, but also a rediscovered longevity which in the last twenty years has involved hundreds of passionate owners. The fourth and final stage of the Classic 12 ‘Dinghy Trophy will take place on 24 and 25 September 2022 in Torre del Lago Puccini, a lakeside district of Viareggio.