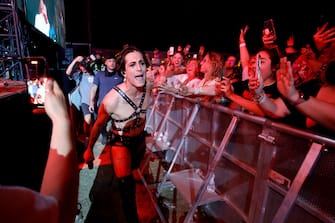 There is also a tribute to the war-affected Ukrainian population in the Maneskin Coachella concert, which brought old and new hits to the prestigious Californian festival, including “Shut up and good” and “MAMMAMIA”

Watch the VIDEO: “The Maneskins sing MAMMAMIA at the Coachella 2022 Festival”

Damiano, Victoria, Thomas and Ethan are confirmed as an explosive and charismatic group, which has conquered America and the Coachella stage. They will return to Indio next week, for the second festival weekend.

Coachella 2022 – Day Three, the diary from the Festival of our correspondent in California

Maneskin’s rock ignites Coachella: the Roman band invited fans to ‘make noise’ on the stage of one of the most anticipated festivals in the world music scene, back live, after two years of hiatus due to a pandemic, in Indio, County of Riverside, California.

Coachella 2022, the best photos of the first day of the Festival

Over 45 minutes of show, started around 7.30 am Italian time, for Damiano, Victoria, Thomas and Ethan which ended with the scream of the singer “Free Ukrain, fuck Putin”.

The performance began with Zitti e buona, the song with which the Maneskin triumphed last year at the Sanremo Festival and the Eurovision Song Contest.

And then In the name of the father, Mamma mia, Beggin ‘, I wanna be your dog, I wanna be your slave of which they recorded a new version with Iggy Pop. In closing, We’re gonna dance on gasoline, the song with which Maneskin joined the Global Citizen campaign #StandUpForUkraine as a sign of support for Ukraine.

“Did you have fun? We also have fun, it is a privilege to live while the bombs fall on the cities”, shouted Damiano to the audience. And he mentioned Charlie Chaplin and the speech from the movie The Great Dictator.

As always, the frontman also left his mark on the look: black leather boots and shorts, fishnet stockings, studs and a sort of pink tulle duster which he then took off during the performance

The band performed at Coachella in The Weeknd line up with The Swedish House Mafia, to fulfill a further dream and complete the mosaic of hits collected in the United States and around the world.

A concert in which the Maneskin surpassed themselves: they brought old and new hits to the stage, including “Silent and good” and “MAMMAMIA”, a cover of Womanizer by Britney Spears (“because we love Britney so much – says Damiano) and greeted the public with a tribute to the war-affected Ukrainian population.

Damiano, Victoria, Thomas and Ethan are confirmed as an explosive and charismatic group, which has conquered America and the Coachella stage. They will return to Indio next week, for the second festival weekend.

The band brings the most recent hits, from “Shut up and good” to “Beggin ‘”, but also a cover – Womanizer of Britney Spears “because we love her so much” says Damiano.

Damiano himself, in closing, recites a poem by Charlie Chaplin, before paying homage to the Ukrainian population affected by the war, with the song they have recently published by joining the #StandUpForUkraine campaign.

Maneskin’s music speaks for itself and makes us understand that this band is different, but above all it goes beyond all borders, not just geographic.