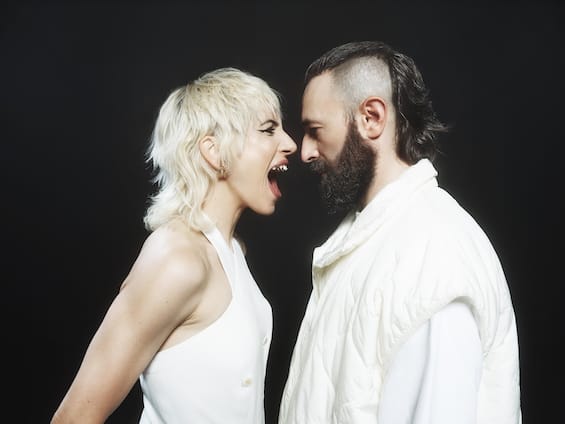 A diary of notes that was first transformed into songs and then into a fresco of our age. With the originality that distinguishes them i Coma Things publish A wonderful way to save yourselfwritten by California And Fausto Lama with Fabio Dalè and Carlo Frigerio and produced by Mamakass together with Fausto. The album narrates the duo’s artistic and personal evolution by presenting a clear snapshot of their music today. A wonderful way to save yourself it is an intense and intimate work in which the duo reflects on how to live relationships, especially those of a couple, in an egocentric society that hardly grants the opportunity to relate to each other’s differences.

Let’s start with the history of the album: when and how did you build it? Will there be more surprises for phone booth-style fans?

A wonderful way to save yourself we built and reasoned it in October 2021, it didn’t take us very long, in seven months it was done, on 3 July we delivered the master. It was born to stop for a moment and not to open other paths otherwise it became redundant. It has an almost psychoanalytic aspect, after the Sanremo Festival and a very cool tour we were short of breath. We felt the need to go back to writing and we did it by turning off social media. Now we want to organize something in nature, the record is about going back to the grass leaving the concrete behind. That of the phone booth was an opportunity to find the fans and it develops into a video with them that is also a small documentary.
The album has a diaristic development, almost as if it were a concept that tells a little about your life: did searching for your essence and then telling it create embarrassments for you? Found your center of gravity?

It was a bit of a necessary analysis to move forward today as a person. We had to get ourselves out of the world for a while because we were overwhelmed by ourselves. We try to trace our history with the eyes and feelings of today. The comparison is nice.
We are getting to know the bombs but not the momentum of humanity. There is the world in ruins with no more ideals. Dedicate a song to the idea of ​​resistance in the broadest sense of the term: in this situation is it still true that growing up means adapting? And where do the years of freedom hide?

There Resistence rework the past. It is also going back to our 15 years when you experience sentimental and human distress, when you enter a kindergarten and begin to evaluate your place in society. Then there are the impetuous years of madness and excesses, even in the identification of the movements to which one adheres. Then comes the resistance which is a mature disillusionment. You have to find your center of gravity and now as adults we process our being today.
When you wrote There is terrible music did you have the knowledge that it would be one of the most popular questions?

Actually not too much, it speaks of a fun context where the music is varied and you don’t like it all.
Who is the serial critic?

The keyboard lion: whatever you do today is predisposed to criticism, perhaps with joy. We have moved away from social networks due to an overload of information that becomes disguised boredom; if, on the other hand, the criticism is well thought out, so be it.
Napster is very Orwellian: what faults do Napster and his grandchildren have in our daily lives?

It is a provocation. In the record we analyze social aspects. There is no mainstream and alternative music, it’s all in one stream. What are we ourselves? The channel is one and uniform.
I would like to know from Francesca how she reacted the first time she listened I’m putting order. I ask you both if you have now sorted out.

It was a liberation for me too, even though I wasn’t the protagonist: the approach to psychidelia, the songwriter… finally he told his story. We are two people and we are going to make order.
Maldinoia it looks like version 2.0 de The Dark Evil by Giuseppe Berto: is this the depression, the melancholy of this era? For more also in Dull Days there is nothing wrong but there is the confusion between dreams and reality … the sense of loss does not seem that of afternoons made on purpose to get lost. There is no disenchantment.

Yes, because today boredom is not conceived, today it is all about escaping boredom, it is difficult to get moments to get bored. If you have ten minutes to spare, you look at your phone and don’t look for a moment for yourself. Reflection following boredom is a luxury.
“Remember you are something in the lives you live in”: is the meaning of music contributing to building an identity, even a small one?
You are made of glass it is the classic love song, it has an added value because it is born on an audition, then the second part on its vocality. It goes beyond us, it also tells a love how to get out of it: the essence is that the way I knew you it is impossible that you are not loved by the world. The protagonists of this love are the others, in the end all the differences and contradictions are what made you strong.
What will happen in the coming weeks?

We start with the instore to meet the closest fans. We will be back in the clubs from March 10th and then we will play in the summer. We will also go abroad, London and Paris and perhaps Brussels. We are happy to be back in the clubs because we have been missing for four years, practically shortly after we were born!