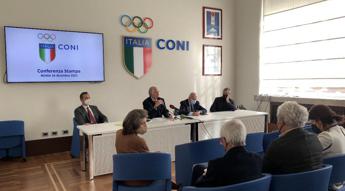 December 16, 2021. A date that will surely be remembered as the one that changed the world of Sport for the better. Convicted of violence and harassment finally out of sport. The President of Coni Giovanni Malagò wanted to give a clear and clear answer from sport, with no ifs and buts. All the registered subjects who are sanctioned with a final judgment for violence against people and animals are outside not the single federation but from all Italian sport. An important signal born from a battle fielded by the FISE and strongly desired by the President Marco Di Paola who this morning in the Coni Council approved together with the other members the issue of radiation for those convicted of violence. According to the President Marco Di Paola “together with the Coni we will also carry out awareness raising and promotion activities. Sport is a formative moment, families entrust the children to us and President Malagò and the council wanted to give an important signal for our whole world. The sanction is already a defeat because someone has suffered violence but sport wants there to be, in addition to a preventive activity to be implemented, a definitive response for the victims of these ignoble acts “.

The resolution provides for the repeal of the rule referred to in point 7.4.8. of the Fundamental Principles, which cited: “the disqualified person can practice sporting activities, and therefore be registered, with bodies other than the one in which the radiation was imposed, without prejudice to his ineligibility for any office and the prohibition to hold any office at within the sports system. The expulsion measure, as well as the subsequent, any rehabilitation measure, as well as all the sanctions that can be registered in the register of Disciplinary Sanctions of the Sporting system must be communicated to CONI which makes it known, in compliance with the current provisions on privacy, to all Federations, Associated Disciplines, Sports Promotion Bodies and Meritorious Associations, in order to make ineligibility effective in other sports Bodies “.

On the other hand, the following text was approved today as part of Point 12 of the Fundamental Principles, called “Principle of freedom to provide sporting activities”: the cancellation has been imposed for the subjects against whom the cancellation provision has been imposed by the competent justice bodies of the Federations and Associated Disciplines recognized by CONI. In order to make this prohibition effective, the radiation provision, as well as any rehabilitation provision, must be final and communicated, by the sports organization that issued the radiation, to the Coni which makes them known, in compliance with the current provisions on the protection of personal data, to all Federations, Associated Disciplines, Sports Promotion Bodies and Meritorious Associations. In case of violation of the prohibition, the Public Prosecutor’s Office for Sport reports the offense to the Public Prosecutor of the Entity concerned for the purpose of initiating disciplinary action against the administrative bodies responsible for the violation and transmits the documents to the National Council of the Coni for the declaration of nullity for all purposes of the prohibited membership “.

La Fise expresses deep satisfaction for the important result achieved thanks to the sensitivity expressed by President Malagò and the entire Coni Council. A strong and definitive stance that the entire world of sport takes towards those members who commit such serious crimes.