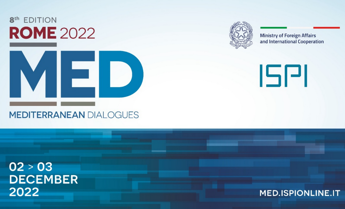 Global Value Chains have already been deeply affected by the repercussions of the pandemic and are now further affected by the outbreak of war in Ukraine. The shortage of raw materials and electronic components, the increase in transport costs, the limits on the mobility of personnel and the trend of inflation have led to important and partly unexpected disruptions of the value chains. At a time when value chains appear increasingly fragile, the need to regionalize them to increase their resilience has become an absolute political priority. Concepts and principles such as “re-shoring”, “back-shoring”, “near-shoring” and “friend-shoring” are increasingly recurring in the political and economic debate on the future of globalisation. These are the themes at the center of the round table “Re-shoring, Near-shoring or Friend-shoring?” as part of the eighth edition of the Rome MeD – Mediterranean Dialogues Conference – promoted by the Ministry of Foreign Affairs and Italian Cooperation and Ispi.

According to Maria Tripodi, Undersecretary of State to the Ministry of Foreign Affairs and International Cooperation, Italy, “the need to diversify our markets has prompted us to strengthen our partnership with Mediterranean countries to reduce dependence on Russia”.

“Global value chains are experiencing unprecedented strains due to the accumulation of growing emergencies in a multi-crisis scenario in which critical health, humanitarian, economic, logistical, geopolitical and energy factors intersect causing sudden and costly disruptions. In this framework, relations between Europe and the countries of the MENA area are more crucial than ever, Italy can contribute in a decisive way to improve their integration. Business associations are massively committed to supporting this process”, commented Marco Felisati, Deputy Director Internationalization and Trade Policy, Confindustria.

“With 38,000 people involved and an estimated contribution to the Italian GDP of over 0.5%, ours is an integrated supply chain that creates value, work and development here in Italy. We do it in many ways: by investing in territories and establishing virtuous public-private partnerships. The international agreements that have facilitated free trade between Europe and Japan also play a crucial role, showing the resilience of value chains all the more so in a complex phase like the one we are going through in the global context” said the President and CEO by Philip Morris Italy, Marco Hannappel.

“Ours – he continued – is an integrated supply chain that starts from Italy and expands all over the world. Thanks to the Crespellano plant, the first in the world of Philip Morris for the production of products without combustion, we export to 40 countries in the world, generating a value of over 1.5 billion each year.We have built a model of sustainable development that invests in Italy year after year in agriculture, industry and services, stimulating the development of an integrated Made in Italy supply chain, with attention particular to the human capital and skills needed today and in the future”.

According to Blanca Moreno-Dodson, Director, Center for Mediterranean Integration, “Europe must adopt a co-investment strategy and think of Mediterranean countries as partners to develop mutually beneficial business”.

“Thanks to globalization and digitalisation, an accident in one part of the world can have an immediate impact on other areas. Russia’s aggression on Ukraine has reminded us of its “side effects”, the main example of which is the food and energy crisis inflicting great suffering on the Mediterranean” explained Shunsuke Takei, State Minister of Foreign Affairs, Japan.

“Japan – he added – has and continues to cooperate with the region also through the development of human resources, the installation of quality basic infrastructure and collaboration with other donors and private sectors. In a context of irreversible globalization, it is a constant effort is needed to improve the resilience of supply chains and to strengthen the rules of international trade based on the principles of openness, inclusion and fair competition”.

According to Tarek Tawfik, Deputy Chairman, Federation of Egyptian Industries, and The Egyptian Center for Economic Studies and President, American Chamber of Commerce in Egypt, “near shoring”, “re shoring” and “friendly shoring” are no longer a matter of choice, but a strategic economic and political necessity for the European community. The aftermath of the Covid 19 pandemic, China’s Covid-zero policy and the war in Ukraine, not to mention the effects of climate change, are shaping new realities that require drastic action to preserve the region’s economic and geopolitical stability. The integration between Europe and the countries of the southern Mediterranean is a quick and successful solution that will serve the strategic objectives of the northern and southern Mediterranean, both economically and politically. The sooner we act, the sooner the risks intrinsic to the region are mitigated,” he concluded.