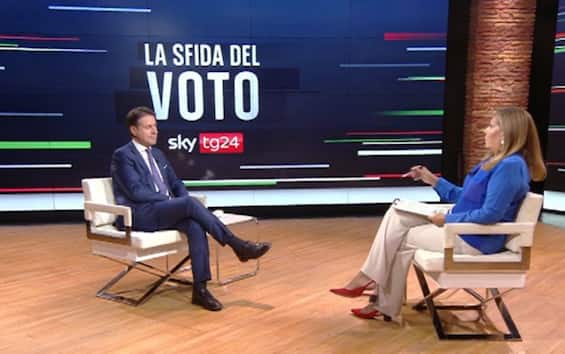 The former Prime Minister and leader of the M5s, five days after the vote, interviewed in “L’Ospite” by Maria Latella, criticized the choice of Lega and Fratelli d’Italia to support the Hungarian government in the European context, despite the accusations of authoritarianism “certified” by Brussels. On the hypothesis of a government without a precise political color: “An unacceptable perspective”

“We are constantly in touch with Beppe Grillo, he is fully involved in our electoral campaign. He has given us a great hand”. Thus the leader of the Five Star Movement Giuseppe Conte, today’s guest of “The interview“By Maria Latella on Sky TG24, responds to those who underline the low participation of the father of pentastellati during this election campaign (TOWARDS THE VOTE: THE SPECIAL OF SKY TG24 – ALL VIDEOS – LIVE NEWS – THE TEST TO UNDERSTAND WHO TO VOTE – FIND YOUR COLLEGE). Conte also looks to his opponents, like Giorgia Meloni. “He was wrong to vote against the EU proposal to cut funds for Hungary” for some moves deemed undemocratic by Brussels. For this, says Conte, the leader of the Brothers of Italy “is unfit to govern”. Criticisms are also directed at the Lega, which followed the same voting line as Giorgia Meloni’s party: “You say you were wrong to vote,” said Conte. And on a possible hypothesis of a government of broad agreements, he underlines: “For us it is wrong, the citizens need clarity”.

“I ask Salvini and Meloni: what idea of ​​democracy do you have?”

For Conte, the Lega and Fdi vote against the budget cut in Budapest was not simply a generic “recognition” of political closeness with Orbán. “A detailed resolution was voted in the European Parliament which certified the illiberal, undemocratic and authoritarian involution of the Hungarian regime. At a time when the Lega and Fdi MEPs not only do not abstain, but even defend this turning point, the problem is also ours, Italian citizens, “said Conte. Meloni has always been a great advocate of national autonomies from external pressure and underlined how Orbán was democratically elected. “Wrong, even Putin was voted by an incredible majority. The vote cannot legitimize a reform process in an illiberal sense. The EU is judging this turning point and Salvini and Meloni had to acknowledge it. So I ask myself: what ideas of democracy do they have? ? “, said Conte.

“Statesman Dragons of the Year? You can’t rule with prestige”

In New York, Prime Minister Mario Draghi received the award as statesman of the year from the Appeal of Conscience Foundation. “We are happy that it has prestige abroad”, said Conte, “but it is not with this prestige and these curriculum that we can manage the emergency phase we are going through”, starting with the energy crisis. And while US President Joe Biden congratulated Draghi on his work, Conte received greetings from former White House number one, Donald Trump. “I am not at all embarrassed to receive the accomplishments from Trump, he said that when I was in government, Italy and the US had a good relationship. Why should he embarrass me? ”, Conte reflects.

“No to broad agreements”

Would the Movement ever go to government with political forces that are now its opponents? “Voters need clarity. Wide understandings are not good. It happens that it is not possible to pursue a clear direction of economic policy. We need a strong project, we have it. We are applying to make it happen for the citizens, with heart and courage. Broad agreements are not an acceptable prospect for us, ”Conte said.

“I wish Di Maio good luck, but he disappointed me very much”

Conte said he wanted to wish “good luck” to former party colleague Luigi Di Maio, who escaped from the Movement in open controversy with Conte’s positions on crucial issues such as the war in Ukraine. “We do not wish evil on anyone. It is clear, however, that there has been a very strong disappointment for all his choices and for the fact that he has renounced principles of which he has been convinced for years ”, underlined Conte.

“The interview”Is therefore presented in its most classic guise with accurate face to face in which political and topical issues emerge without neglecting, as always, the more human and personal aspect of the interviewees. Since 2005 Maria Latella has followed six political elections and three European elections with Sky TG24. Columnist of the Messaggero, author and presenter of Radio 24, she was a prestigious signature of Corriere della Sera, editor of the weekly A, author of books including “Tendenza Veronica”, the successful biography of Veronica Lario and her most recent ” public virtues “.