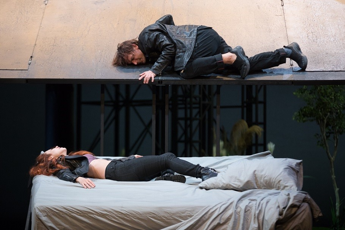 It’s a ‘Hamlet’ contemporary what Giorgio Barberio Corsetti reproposes to Argentina Theater in Rome until December 4, with the staging of which he signs adaptation and direction, based on the translation of Cesare Garboliwhich he sees in the role of the protagonist Fausto Cabra. The dramaturgical system created by William Shakespeare the classic one remains, including the setting in the Kingdom of Denmark, but the actors – including theOphelia by Mimosa Campironi, Pietro Faiella’s Polonius, Paolo Musio’s Claudio and the Specter, Sara Putignano’s Gertrude and Francesco Sferrazza’s Horace – move in the game of scenic boxes designed by Massimo Troncanetti.


“The viewer finds himself immersed in the Shakespearean world, the city of Elsinore it is our inner city pervaded by passion and intrigue”, reads the scene notes. “Suspended stairs, ascents and descents, inclined planes, hidden gardens, are the stages of Prince Hamlet’s journey in search of his place in the world” while “in this scenographic carnival the protagonists of the drama roam, dressed in contemporary clothes, chasing impulses and urgencies, giving life to their characters with body and soul and battling against the gears of that relentless machine that drags them towards the end “.

Explains Giorgio Barberio Corsetti in his director’s notes: “In the eternal drama of the power and legacy of revenge, Hamlet appears only on the scene that represents the space of his mind, where he can find the determination to continue living in reality, which is made up of usurpation and outrage, anguish and doubt, murky passions and gory stories. The city of Elsinore appears in its terrible and tireless activity like the factory of dreams that we visit every night and all this is evident to us in the livid light of the stage”.