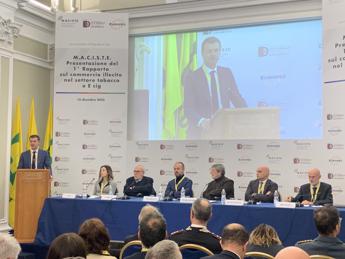 Our country goes against the trend of the EU with a consumption of 1.4 billion illicit cigarettes

The presentation of the ‘1st Report on illicit trade in the tobacco and E-cig sector‘ created by Eurispes, in collaboration with the Agromafie Observatory Foundation and with the contribution of Philip Morris Italia. The elaboration of the Report is the result of the work carried out by the MACISTE Table (Monitoring Agromafias Contrasting Illicit Tobacco and E-cig Sectors), coordinated by the Foundation and which every year involves the main protagonists of the sector at national level to return an exhaustive picture of the criminal phenomenon in the tobacco sector.

Representatives of the Police Forces, the Customs and Monopolies Agency, the Investigative Directorate and the District Anti-Mafia Directorate, experts in the sector and members of the scientific committee of the Agromafie Foundation were called to participate in the working tables. Furthermore, various representatives of the competent Ministries took part in the various tables, including: the Ministry of Agriculture, Food Sovereignty and Forestry, the Ministry of Foreign Affairs and the Ministry of Enterprise and Made in Italy.

According to the latest data collected, presented during the meetingin 2021 Italy confirmed itself as a best practice at European level, with a consumption of 1.4 billion illicit cigarettes, equal to 2.2% of the total, compared to a European average of 8.1%. There was also a drop of 1.2 percentage points compared to 2020, against a European trend of growth – in the same period – by 0.3 percentage points: a result that is possible thanks to the constant commitment and effectiveness of the action law enforcement and deterrence carried out by the Police Forces and the Customs and Monopolies Agency. At national level, the loss of revenue linked to the offense was 272 million euros (-36% compared to 2020, equal to a recovery of around 100 million euros on an annual basis).

For Ettore Prandini, National President of Coldiretti and of the Agromafie Observatory Foundation, who spoke at the event, “fighting illegality is important to protect a sector such as that of Made in Italy tobacco production which has the record at European level. A record achieved thanks also to the instrument of supply chain agreements which have marked a decisive turning point in terms of product quality, transparency and innovation. But the fight against criminal phenomena also helps to defend the health of consumers against the risks associated with the lack of controls”.

Gian Maria Fara, President of Eurispes, underlines: “It was and is above all the progressive capacity for control and repression shown by the police forces as well as the effective attention paid to the phenomenon that held back the spread of illegal tobacco trafficking in Italy by the relevant Authorities (in particular the Guardia di Finanza, the Carabinieri, the State Police, the Customs and Monopolies Agency, the DDA and the National Anti-Mafia and Anti-terrorism Prosecutor)”.

Gian Carlo Caselli, President of the Scientific Committee of the Agromafie Observatory Foundation, observes how “the survey aims to provide an in-depth picture of the phenomenon of illicit trade in the tobacco sector – raw and processed – and the related implications. The issue of the offenses in question is not sufficiently present in the public debate despite the strong negative effects of the phenomenon on a national and international level.The survey is part of the institutional research and study activities of the Observatory, in the awareness that any recovery of legality constitutes an advantage for the community we are a part of”.

“MACISTE returns a very important photograph for everything related the criminal phenomena linked to smuggling. 2021 saw a drop in the consumption of smuggled products in our country and it’s a good sign but we have to move forward in this direction” – commented Marco Hannappel, President and CEO of Philip Morris Italy, who added: ” Philip Morris is and will always be at the forefront of all actions to combat illicit trade and smuggling.”