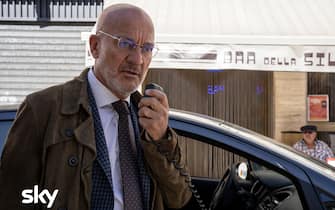 In the first episode of Cops 2 – A gang of cops by Luca Miniero, whose second episode will premiere on Monday 13 December and will also be available in streaming on NOW and On Demand, we saw Claudio Bisio return as the now legendary Commissioner Cinardi

In the first episode of Cops 2 we got to know new characters, starting with the magistrate Catia, played by the talented Gaia Messerklinger

Cops 2: the new entries in the cast

Francesco Mandelli reprized the role of Benny the Cop, who as always lives his job as a policeman as if he were the protagonist of an action movie

Francesco Mandelli, not just Cops 2: the must-see films of the actor who plays Benny the Cop

In the first episode of Cops 2 – A gang of cops Benny the Cop, following an awkward conversation with his grandmother, suddenly “discovers” the existence of women

Cops 2, the trailer and the first photos

Pietro Sermonti and Giulia Bevilacqua also return as Nicola and Maria Crocifissa. The couple, however, go through a period of crisis, and so, on the advice of Don Manolo (and to her great relief), the two take a break.

Cops 2, the cast: it’s the turn of Francesco Mandelli and Giulia Bevilacqua

Having been thrown out of the house, Nicola finds nothing better to do than to show up at the door of Inspector Cinardi

Cops, the locations of the Sky Original production

And so, Commissioner Cinardi has nothing left to do but accept this uncomfortable coexistence

Cops 2, the previews on the film: laughter and mystery

The “victim” of Benny the Cop’s hormonal awakening is Maria Crocifissa, with whom the agent falls madly in love (and never mind if it is the wife of a colleague, even if struggling with a pause for reflection)

All the news on Cops – A gang of cops

Maria Crocifissa, however, is not of the same idea as Benny and will try in every way to make him understand that “it’s not what”

Tommaso, played by Guglielmo Poggi, is instead grappling with the organization of the first Gay Pride in Apulia, an extremely important event for him

Tommaso in the middle of the Apulia Gay Pride

However, participants in the Apulia Gay Pride will have to face the “perplexities” of the locals

A tense moment during Gay Pride

During the first episode of Cops 2 however, we do not only follow the events of the protagonists, because the episode focuses above all on the mystery that Cinardi and his followers will be called to solve: the theft of a cross inside which a precious relic is kept

Following the theft of the cross, the charismatic Don Filippo, played by Tullio Solenghi, is sent to investigate by the Vatican

Don Filippo is not only an excellent investigator: he is also on more than friendly terms with the Holy Father, to whom he gives decidedly earthly advice on matters such as laundry. His presence will create more than a headache for Cinardi

Cinardi will also be joined by Catia, a decidedly sui generis magistrate, very well prepared on a theoretical level, but with still little experience in the field

Dino Abbrescia returns to interpret zu Tore, who has now become a sort of adjunct member of the Apulia police station, in the role of Cinardi’s confidant and “infiltrator” in the world of evil

A moment from the first episode of Cops 2, directed once again by Luca Miniero, who was already directing Cops – A gang of cops

A photo from Cops 2, first episode

Between crimes and mysteries, the now disillusioned Commissioner Cinardi will also find himself struggling with a possible new love

A “dramatic” moment from the first episode of Cops 2

Tullio Solenghi on the set of Cops 2