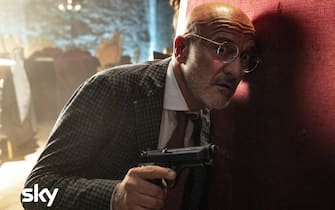 Claudio Bisio in the role of Commissioner Cinardi in the second episode of Cops 2, entitled The hand of the dead

WATCH THE VIDEO: Cops 2, the behind the scenes of the film

Neither The hand of the dead Cinardi returns to pair with the magistrate Catia, played by Gaia Messerklinger

Cops 2, the new entries of the cast

As always, alongside Cinardi there are the agents of the Apulia police station (here we see Pietro Sermonti and Francesco Mandelli in the roles of Nicola and Benny the Cop), to which Tonino is added in this episode, as an “additional member”, played by Dino Abbrescia

Cops 2, the cast: it’s the turn of Francesco Mandelli and Giulia Bevilacqua

Neither The hand of the dead Commissioner Cinardi is grappling with a particularly complicated case: the murder of the Viscount, a fallen nobleman who squanders his family assets for his amorous conquests

Cops 2, the review of the first episode of the Sky Original production

Cops 2, the photos of the first episode

After a too long stay at Cinardi’s home, the bewildered Nicola, thrown out of the house by his wife, will find himself staying in the house of Benny’s grandmother.

Cops 2, the cast of the film

Among the characters with whom the agents will find themselves talking is also the illegitimate daughter of the Viscount, who earns a living as a lap dancer

Cops 2, the backstage in a video

After having “discovered” the female gender in the previous episode, Benny the Cop will find himself grappling with the management of his hormonal storm

Francesco Mandelli: the films to see with the actor

Claudio Bisio, not only Cops 2: the best films with the actor

The interrogation of the Viscount’s daughter

Among the new characters introduced ne The hand of the dead also the brother of the Viscount, or the Count, played by Ninni Bruschetta

The Count’s mother, an old lady with the “vice” of giving free c ****** to her neighbor

Catia and Cinardi struggling with the Count

An action scene from The hand of the dead

Among the key characters of this episode we also find Tonino, who will join the Cops as an infiltrator

Thomas undercover as a vendor in a kiosk

Tommaso and Cinardi in action

A fraternal hug between Nicola and Benny, who in the first episode had found themselves divided by the common love for Maria Crocifissa

Grand finale for Benny the Cop, engaged in the role of lap dance pole