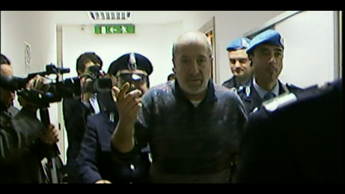 The docufilm on the terrible serial killer who killed 17 people in six months, premiered at the ‘Prix Italia’ in Bari

“One of the darkest, most engaging, scariest but also from a certain point of view the most instructive stories about the dark side of human nature.” Like this Pino Corrias describes to Adnkronos ‘The three lives of Donato Libra‘, the docufilm on the terrible serial killer who killed 17 people from 15 October 1997 to 20 April 1998, which will be broadcast tomorrow in prime time on Rai2 for Rai Documentari, premiered at the’ Prix Italia ‘in Bari. by Corrias himself and by Renato Pezzini, which investigates a story that “in our opinion had been little told,” says Corrias. “He is remembered as the killer of trains, but in reality he only committed two murders on trains, the others he committed elsewhere: as many as 17 murders in six months no one had committed”, echoes Pezzini.


Why the ‘three lives’? “Because we have found three – says Corrias – the first is that of the gambler and thief, the second is that of the exterminator, because someone who kills nine men and eight women in six months is an exterminator. His third life there. ‘we discovered by investigating the 22 years he spent in prison and that no one had ever told because the story of Libra ends with a year of trial, where he never appears, and with thirteen life sentences. once his confession, “entirely recorded by the carabinieri, which is broadcast in the courtroom during the trial and which he has never heard from anyone before. We instead use it a lot in the doc because we believe it is very strong “.

“He says ‘I am a madman, a lucid madman’ – explains Pezzini – because in the process he tries to play the card of madness, convinced that this can generate a review of the process, a psychiatric report. But then he also abandons this path”. In reality, Libra was examined by as many as 13 psychiatrists, and “all excluded the inability to understand and want. Everyone spoke of a mystery – Corrias underlines – of a gear that breaks in his head, but there is no There was never a time when he acted without the will to act. He killed the 17 people out of revenge, out of grudge against the world: he is one who feels isolated. Especially women he killed out of contempt: he had problems with sexual impotence, but in reality it is a story of a life grown crooked that determines his behavior. The most convincing thing the magistrate tells us and one of the Italian psychiatrists interviewed will also tell us, namely that he takes pleasure in controlling life and death of the people in front of him and he kills them to feel omnipotent and master of the lives of others “.

“In the story of Libra – observes Pezzini – there is actually not a very strong psychiatric dimension. He kills the first two victims in revenge, because he felt cheated by people he considered friends. He is very low on money, he has always led a very comfortable life and in four or five months he loses 400/500 million lire at the game which is an important figure even for someone who has a lot of money like him. So he starts killing for revenge, but then he starts the sequence of seventeen murders that makes no sense other than the search for a pleasure that evidently does not even feel so much, because it continues to replicate this thing like the addicts who are always looking for the emotion of the first hole “.

“Moreover – adds Corrias – unlike the classic serial killer of criminal literature, who rages on the bodies in various ways, Libra kills them and goes away without feeling any remorse. When he tells it, the story is always the same, of a monotony absolute. Fortunately, the investigators take him and break this chain that he could have continued virtually indefinitely. ” Both Corrias and Pezzini are convinced that “telling this story today serves to tell something very disturbing about the nature of men, because what the magistrate and also the carabinieri and psychiatrists will tell us is that in the end we all potentially hide that ‘click’ that if we think of the guys who go to war, who might have been quiet guys before and who in the space of a month or two turn into the worst sadists. You learn to kill. If you release those inhibitions that prevent you from doing it , morally and ethically, then the abyss opens up. The story of Libra tells us what our worst part is. In this sense it is always instructive, because in these criminal stories we often identify with: if we are afraid of them, we say ‘ I’m not like that ‘”.

Finally, the third life of Libra is that of the last few years and of the mystical turning point: “What surprised us – says Pezzini – is that when he caught Covid he did not want to cure himself. In the end he was seized with remorse, what he has never tried in 22 years. And he sets up his funeral, of which we found the images that close the documentary. There is his coffin in the center of the prison church, surrounded by 17 chairs with as many names as those of his victims, with a lily on each chair. He, urged by the deacon of the prison, agreed to carry out this ceremony as a form of ‘compensation’ for the victims who instead during the interrogations he treated with an impressive detachment and carelessness ” . “At the end of his life the ghosts of the past resurface which translate into a mystical crisis evident in the letters he writes to the prior of the Bosa community. He prays and distributes his small disability pension between an orphaned child and a Sicilian woman mother of three children. She is sick and Libra prays asking to die instead of her. He becomes a kind of ‘decent’ man and that turns on a little light in this black story “, concludes Corrias.