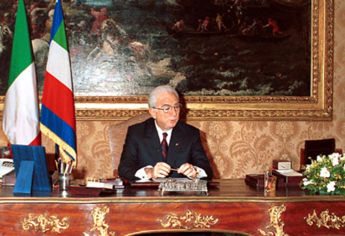 August 17 is the anniversary of the death of the President of the Republic. On June 26, 1991, the message to Parliament on institutional reforms.

“We owe our Constitution recognition; but this sentiment must not prevent us from critical reflection and political commitment to evaluate it in the face of changing times, and therefore to improve and modernize it”, thus avoiding transforming it “into a fetish”, thus betraying “the spirit and values ​​of the 1948 Constitution. What is required is a new national pact to be placed at the foundation of the renewed democratic and republican institutions: neither recent nor past history, nor a worn veil of ideologies or ghosts of utopias, or animus of revenge or revenge, nor the spirit of losers or winners – since when it is freedom that wins everyone has won – it can pose obstacles, to this meeting of citizens and political forces, for a new pact for a renewed Republic. Today we need of an accomplished and governing democracy “. While the electoral campaign is inflamed on the hypotheses of constitutional reform to introduce presidentialism, the words written in black and white thirty years ago by Francesco Cossiga are back today, whose 12th anniversary will be the twelfth anniversary of his death on 17 August, in his dedicated message. to the institutional reforms that as President of the Republic he sent to Parliament on June 26, 1991, one year after the end of his mandate and the end of the tenth legislature.


Observations that entered into the contents of issues already debated in the Constituent Assembly and then in the years following the entry into force of the Constitutional Charter, but also in the method to be adopted to implement an effective modification of the republican order.

“Certainly, the choices of merit are important: presidentialism, semi-presidentialism, chancellorship, government of the Prime Minister, and so on. institutions that are going to be constituted, the choices of procedures through which to make the choices of merit. Woe if the options to be adopted were understood as contractual agreements of power between the parties! Woe if the choices to be implemented were felt as inspired not by ‘ general interest, but with a stubborn will to conserve and manage the share of power gained and maintained, perhaps in the form of an income from a system which, then yes, would be destined for a rapid and not regretted decline! “

‘give governments a direct democratic foundation’

“What appears to be deferrable – the then Head of State recalled with words that in some way can represent a point of reference in the controversies and in the debate underway in these hours – is to restore efficient powers and recognizable responsibilities to the government bodies, through a their direct democratic foundation.This aim can be pursued both with the parliamentary form of government and with the presidential system, according to the experience of Western pluralist democracies.

“Talking about the renewal of institutions and considering this problem as a priority does not mean – Cossiga warned again – to forget or not recognize the great value that the 1948 Constitution has for the history and history of our country, a Constitution that was the fruit of glorious struggles that marked the completion of our Risorgimento process, of which that of a constituent assembly was always a recurring dream and never came true “.

“It is one thing to speak with a sense of the just sacredness of the 1948 Constitution, as a set of principles, values, institutions, in which the fruit of an ideal battle and a struggle for freedom and national redemption has coagulated; another thing is talking about the renewal of institutions. However, those who believe that invoking a season of institutional reform means not honoring those who have fallen into the Resistance, those who fought against the dictatorship, those who paid in prisons, so that the Constituent Assembly could be convened, those who however served or tried to serve the homeland, so that the people could freely give themselves new orders, choosing by direct vote between the Monarchy and the Republic, so that the Constituent Assembly could freely deliberate our Constitution; whoever thought he was hiding within this Constitution, behind this Constitution and, transformed it into a fetish, wanted to block the way to what is the legitimate request for new institutions. ions, in reality – concluded Cossiga – would betray the spirit and values ​​of the 1948 Constitution “.