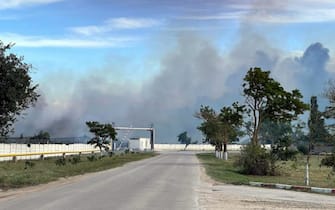 At least eight Russian warplanes were damaged or destroyed in the air base of Saky, in the Crimea, two days ago

Sky Voice, War in Ukraine, the keywords: WATCH THE VIDEO

Till now Kiev officially denied responsibility for the attackwhile Moscow has downplayed denying that any aircraft were damaged and only admitting that “several ammunition exploded” in a storage area of ​​the facility. In the photo, the area before and after the explosion

Satellite images of the area, taken by the private operator Planet Labs, also show before and after photos, as explained and shown by various international media including Ap And Reuters. There base which is located at more than 160 kilometers from the first line

The article and images of AP

British Defense Secretary Ben Wallace he told the Bbc that the UK stands still trying to figure out what happened and added that he thinks it unlikely that Western weapons were involved. The airbase, he explained, was a legitimate target for Ukrainian forces

ALL UPDATES ON THE CONFLICT LIVE