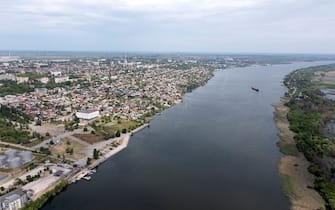 “The Sea of ​​Azov is lost forever for Ukraine. The ports of the Zaporizhzhia and Kherson regions will never be Ukrainian again ”. This is said by the Deputy Prime Minister of the Crimean government, Georgy Muradov, as the Russian agency Ria Novosti writes. But what is the situation on the pitch, e in which territories do we still fight? (In the photo, Kherson)

AZOV SEA – Area is now under Russian control: “I am sure that after the reunification of our regions with Russia, the Sea of ​​Azov will return to being, as before, exclusively an inland sea of ​​the Russian Federation,” said Muradov. (archive photo of Russian soldiers)

Yesterday, Kiev intelligence had talked about the Russian control over the Sea of ​​Azov. The Russians “have become cautious, but their naval grouping unfortunately has full control of the Sea of ​​Azov, this is clear, together with the Kerch Strait, and now they are blocking our ports on the Black Sea,” he wrote on Telegram. press service of the Chief Intelligence Directorate of the Ukrainian Ministry of Defense (archive photo of Ukrainian soldiers)

DONBASS – Meanwhile, the Russian offensive is also advancing in Donbass, where Moscow has attacked 40 cities in the Donetsk and Lugansk regions

“The enemies have shot at more than 40 cities in the Donetsk and Lugansk regions, destroying or damaging 47 civilian sites, including 38 homes and a school. As a result of these bombings 5 ​​civilians died and 12 were injured “, writes on Facebook the General Staff of the Armed Forces of Ukraine, quoted by Bbc

KIEV – Meanwhile, a warning arrives. “We are an important puzzle” for Russia’s colonial aims. “Moscow does not accept that we want to be part of Europe, it wants to occupy Ukraine and I believe that its goal will not stop at the border,” he says. the mayor of Kiev, Vitali Klitschko, in his speech at the Davos World Economic Forum

Russia, adds the mayor, “still hopes to take control of the capital“.” It is no secret that Russia’s priority is to occupy the entire country and the main objective of Moscow is still the capital of Ukraine, the heart of the country “, he reiterated.