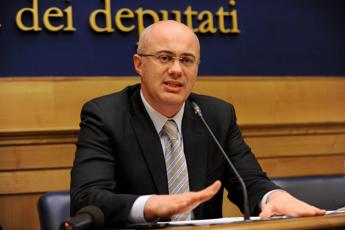 In view of the vote, present the name and symbol of the association promoted by a group of 5Stelle exiles. The former M5S group leader: “We want to continue the dialogue with the Democratic Party”

‘Ambiente 2050’ is born, a political association and not an embryo of a party, promoted and presented today in the Chamber by the Minister for Relations with Parliament Federico D’Incà, by the former head of the M5s group in the Chamber Davide Crippa and by the former 5Stelle deputy today to the Misto group Alessandra Carbonaro.


The first objective, explained Carbonaro, is not to waste the experience and skills gained by the parliamentarians who, during the legislature, abandoned the Movement, conveying them “in a laboratory of ideas. Ambiente 2050 proposes themes that concern us all: innovation, regeneration, research, training, through which environmental challenges can be faced and overcome. We put at the service of the community a place for discussion that will have the environment and the ecosystem at its center “.

In view of the political elections and the complex game of alliances and candidacies, the primary interest of Ambiente 2050 “is to be able to give a voice and a contribution to environmental issues and we will do so – said Minister D’Incà – within the progressive part of the camptrying to bring these issues onto the government agenda “.

Are there 10 days left until the closing of the lists where Crippa, D’Incà and the promoters of the association will materially be placed? “Ours – said the former M5s group leader – is a container, a political association that moves on the progressive front and that the dynamics of the last few weeks within the Movement have ended up breaking. We want to continue to carry on. the line we built during the second part of the legislature. Our goal is to put environmental issues at the center of the progressive agenda “.

“Surely we will not present the lists because we should collect the signatures. We will see what will come from today onwards. If someone wants to collect the themes proposed by Ambiente 2050 … on this front it is clear that the dialogue with the Democratic Party is open, in the a sense that it was already open as political forces that were part of the same majority “, concluded Crippa. During the press conference, the symbol of the Ambiente 2050 association was presented, which graphically refers to Europe with the 12 stars of the flag and the EU flag on a blue background.