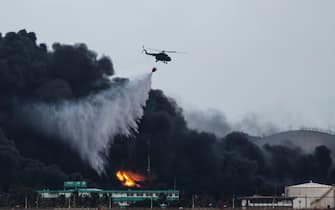 The huge fire that broke out last Friday in a fuel depot in Cuba, near Matanzas, is still not under control

The toll at the moment remains of one confirmed dead, a 60-year-old firefighter, while another 16 are missing

24 people hospitalized, five of them in critical condition, but there are, according to the authorities, at least another hundred burned

About 5,000 people were evacuated from the disaster area. Yesterday several helicopters intervened in the area but were unable to put out the flames. Three oil tanks hit

The fire on the outskirts of Matanzas, a city of 140,000 people 100 kilometers east of Havana, broke out on Friday after lightning struck one of the depot’s eight plants.

The governor of the province Mario Sabines told state TV that the area of ​​the fire is “very large” and that the containment effort is “very complex”.

Sabines compared the situation to the passage of an “Olympic torch” and said that the spread of the fire makes it “difficult” to tame it.

A fourth tank would also be in danger. Deputy Fire Chief Alexander Avalos Jorge said “a chain reaction has been triggered”

Planes, firefighters and other specialists and equipment arrived in Cuba from Mexico and Venezuela

With a telegram signed by the Cardinal Secretary of State Parolin, the Pope prays for the victims of the serious accident