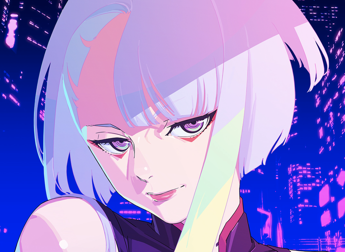 Ten episodes made by the Japanese animation company Studio Trigger

CD Projekt Red, the video game development studio behind The Witcher and Cyberpunk 2077 series, has announced the date of the Cyberpunk: Edgerunners anime series. The first season, created in collaboration with Studio Trigger, will air on Netflix on September 13th. All 10 episodes and will be broadcast simultaneously. Along with the announcement of the official release date, the first trailer was also released. Cyberpunk: Edgerunners tells the story of David Martinez, a street kid trying to survive in a future city obsessed with technology and body modification. Following a personal tragedy, David decides to take control of his own destiny by becoming an edgerunner, an outlawed mercenary also known as cyberpunk. Japanese animation studio Studio Trigger partnered with CD Projekt Red to bring the story to life, with Hiroyuki Imaishi (Gurren Lagann, Kill la Kill, Promare) directing. Yoh Yoshinari (Little Witch Academia, BNA: Brand New Animal) is the principal character designer and executive director of animation.


Masahiko Otsuka (Star Wars: Visions ‘The Elder’) and Yoshiki USA (Gridman Universe) wrote the script based on the story provided by the game’s writers. The original score is composed by Akira Yamaoka (Silent Hill). Cyberpunk 2077 has been a great commercial success, having sold 18 million copies since launch in December 2020, despite a troubled debut. Recall that in the face of bugs and compatibility problems, the game was initially withdrawn from the digital store on PlayStation, and that the versions optimized for PS5 and Xbox Series only arrived this year. The company has made it known that it believes the game will sell steadily over the years, as happened with The Witcher 3, and that the first expansion for the title will only see the light in 2023.