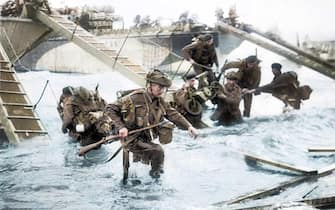 Seventy-eight years ago, the June 6, 1944during the Second World War, about 156 thousand men of the allied troops landed on five beaches of the Normandygiving rise to the largest maritime invasion in history

WATCH THE VIDEO: Normandy, 78 years ago the Allied landings

The landing in Normandy, which marked the beginning of the reconquest of continental Europe by the allied troops at the expense of Nazi Germany, in the Anglo-Saxon world is called ‘D-day’

D-Day, images of the Normandy landings on 6 June 1944. PHOTO

In military jargon ‘D-day’ generically indicates the day an operation begins. But in the collective imagination, Anglo-Saxon and otherwise, it is now synonymous with the Normandy landings

Usa, he wrote a letter from the German front in 1945: delivered to his wife after 76 years

In the Normandy landings, code name ‘Neptune ‘operationwhich was part of the larger operation Overlord‘, Allied troops used 6,939 ships and over 11,000 aircraft

“Saving Private Ryan”: 5 things to know about Spielberg’s film that begins with the Normandy landings

The first to touch the northern coast of France, at 6.30 am, it was the US soldiers with three infantry divisions on the beaches named Utah and Omaha

Attack on Pearl Harbor, the 5 films to see that told the event

An hour later it is the turn of three more divisions on the named beaches Sword, Juno and Gold in the Anglo-Canadian sector

During the operation, only among allies, ben 4,400 soldiers lost their lives

The landing initially it was scheduled for June 5, 1944, but was postponed to the following day due to bad weather conditions on the English Channel. However, the improvement was not as clear as the allied meteorologists predicted, so the operation was still complicated by bad weather

Amphibious landings are preceded by a extensive aerial bombardment

US General Dwight Eisenhower, commander in chief of the operation, also planned a massive intervention of airborne troops. In the photo the men of the 22nd independent company of British paratroopers preparing for the raid

After the conquest of the coast, the allies began to land in Normandy with heavy vehicles (photo outside the collection of restored images)

The attack plan of the beach of Omaha

The original black and white photographs have been painstakingly restored and colored by Royston Leonard. In the shot a German Panzer tank

During the landing, the command of the Nazi troops was there Erwin Rommelappointed a few months earlier by Adolf Hitler as supervisor of Western defenses