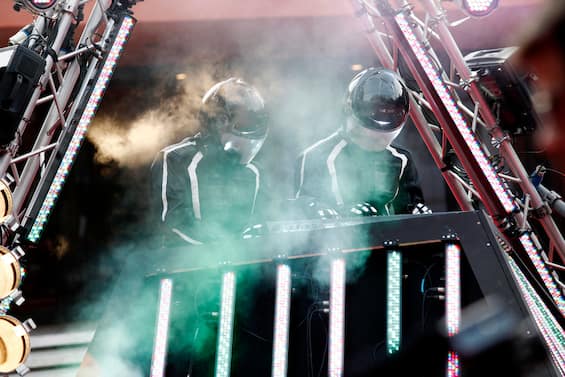 In his essay Modern culture Roger Scruton defines techno music and electronic music in general: “The voice of the machine, triumphing over human expression and nullifying its pre-eminent claim to our attention. (…) You are listening to the machine, as it speaks in the moral void”. This victory of the machine over the human in music has been sublimated by Daft Punka French couple who had released their first album Homework just a few months before Scruton’s essay, released in 1998. The two would have long hidden their faces behind robotic helmets, creating for years an aura of mystery about what their face actually was. Yet, at the time of their debut, it was still possible to see them on stage as they were, without masks. For example, it also happened at the Mayan Theater in Los Angeles, during a live show of which a video fragment was recently shown on YouTube.

When Daft Punk put their faces on it

The concert where Thomas Bangalter and Guy-Manuel de Homem-Christo have shown themselves without their characteristic costumes had so far been shown only once last year, during a live Twitch born especially to celebrate the first anniversary of the breakup of Daft Punk. After that impromptu appearance on that precious document silence had fallen, no one seemed able to be able to retrieve it from the archives of the authors of One More Time if not perhaps themselves. Since they separated in 2021, the two members of the project have increasingly generously donated unpublished material fished out of their past, using different platforms (including even Tik Tok). This time the precious extract was published on their YouTube channel, immediately becoming a small case on the web. The clip dates back more than 25 years and shows the two performers busy blowing up the crowd with their own Rollin’ & Scratchin’.

The eighth song in the tracklist of Homework arrived in that historic work immediately after the hit Around the World and represented one of the songs closest to techno on the album, also due to the fact that it was one of the first compositions made public by the duo. Rollin’ & Scratchin’ in fact, it had been spinning in the hands of deejays since 1995, when the piece was originally released in tandem with the other single From Funk. The “new” video in which you listen to the piece lasts approximately twelve minutes and was recorded shortly after the release of Homeworkaround the time leading up to theAlive ’97. The twentieth anniversary of the record and the accompanying tour was celebrated in the year that we have just left behind, with a vinyl reissue of both Homework what about Alive ’97. A nice way to remind us that, despite everything, Daft Punk even survived their breakup by representing in music that victory of the machine over human expression foreseen by Roger Scruton more or less always in that period.