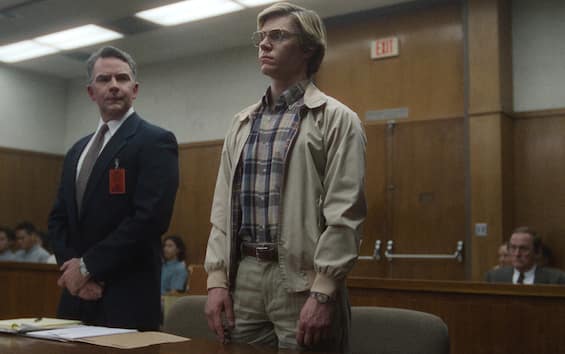 Unfortunately, the concerns that have arisen on the net in recent weeks are materializing: in the last period an appeal born from the web had clamored not to dress up as Jeffrey Dahmer for Halloween, for fear that one of the most brutal serial killers in history of humanity (or rather: of inhumanity …) could become an icon of pop culture. Unfortunately, that truly bleak scenario is coming true: Shirley Hughes, mother of one of the victims of the serial killer, in recent days has lashed out against eBay because she was selling the Milwaukee Cannibal cosplay.

It is the mother of the aspiring deaf model Tony, one of the 17 men and boys who between 1978 and 1991 were killed and dismembered by the killer mentioned in the Ryan Murphy miniseries starring Evan Peters, Monster – The story of Netflix’s Jeffrey Dahmer (also visible on Sky Q and via the app on Now Smart Stick).

Dahmer inspired some clothes that were recently taken off eBay, deleted from the site after numerous controversies and the appeal of the victims’ families. Dahmer-themed sales have been canceled as they violate the violence policy.
That the famous e-commerce has decided to make a clean sweep of all the costumes that pay homage to the serial killer is reported exclusively by the US site TMZ, to which an eBay spokesperson said the company has policies that ban listings that glorify hatred, violence, and criminal activity. As sales of Dahmer-inspired clothing and accessories (from shirts to glasses) are clearly adverts glorifying hatred, violence and crime (as above), they have all been removed.

The official policy, listed on their site, states that there is no room for “objects closely associated with or benefiting violent criminals, their acts or crime scenes for the past 100 years,” as it reports. TMZ.

“We have been told that eBay is constantly checking the site, looking for similar listings that also violate policies” reads TMZ. “As we reported, tons of Dahmer-inspired costumes were on sale on the website when the Nexflix series gained popularity: everything from its signature glasses, a blonde wig and a shirt similar to the one Evan Peters wore on the show.”

An eBay spokesperson has branched through LADbible the following statement: “Under our Disaster and Tragedy Policy, eBay does not permit the sale of items that portray, glorify or attempt to profit from human tragedy or suffering, or are insensitive to the victims of such events. Our team is reviewing a number of articles listed in relation to Jeffrey Dahmer and will take action as appropriate. ”

The criticism of the mother of one of the victims

All time TMZ had reported exclusively on October 16 the critical comment of the mother of one of the victims of Jeffrey Dahmer, who explained that for them to see that on the net there are the Halloween costumes of the serial killer who tore him to pieces the son is a real torture.

Shirley Hughes is the mother of Tony Hughes, one of the 17 names of young men murdered by Dahmer.
His mom told TMZ that already for her – as well as for all the other parents and relatives of the victims, some of whom have directly commented on the series, such as Rita Isbell Lindsey – to see a successful series about the serial killer who killed your son is heartbreaking. And now having to see even people dressing up like that killer is truly indigestible.
The same co-creator of the series, Ian Brennan, admitted in an interview with Page Six who just doesn’t understand the rise of Dahmer’s “fans” who are thirsty for everything about that killer. “It’s creepy,” she commented. “Crazy”.

Most large retail stores have given up on selling Jeffrey Dahmer costumes due to all the outrage, but many people have flocked to online stores, such as eBay, to sell and buy clothing and accessories (for example glasses with gold metal frames or the blonde wig, in addition to the shirts that characterize Dahmer in the show, reproposed slavishly by studying in depth even the real wardrobe of the monster) to dress in Jeffrey Dahmer style.

Shirley Hughes told a TMZ who is sick of the idea that Netflix and all online stores profit from the death of her son, while none of the victims’ families saw a dime. In the past few days, you have added that all Dahmer-themed eBay ads should be removed. Or you have speculated that the profits could be donated to the families of the victims, for an ethical question.

The woman added that if Netflix hadn’t streamed the show, none of the families would have been victimized again. And certainly no Jeffrey Dahmer costumes would appear on eBay this year.

Speaking of the latter, Shirley Hughes said it was pure evil, and she doesn’t understand how people who choose to dress like him can sleep at night.

Tony’s mother also condemned the Netflix show because she did not contact the families of the victims, she also criticized the dramatization, stressing that “it did not go that way”.
The woman, interviewed by the British newspaper The Guardian, he had said: “I don’t see how they can do it. I don’t understand how they can use our names and create stuff like that ”.