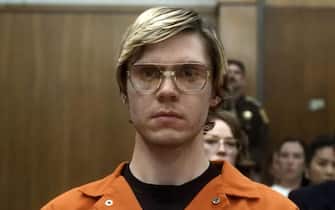 Evan Peters was born in Saint Louis on January 20, 1987 and then moved with his family to Michigan where he attended Grand Blanc High School.

WATCH THE VIDEO: DAHMER – Monster: The Story of Jeffrey Dahmer, the trailer

The 15 best movies and TV series about serial killers

The best TV series to see in September 2022. PHOTOS

WandaVision, everything you need to know about the Marvel TV series

In 2018 he joined the cast of the television series Poses

Emmy Awards 2021: here are all the winners. PHOTO

Peters over the years has participated in several TV series, such as Criminal Minds, The Mentalist, The Office And Parenthood

As for his private life, he was linked from 2014 to 2019 with Emma Roberts, known on the set of Adult World

Peters also had an affair with singer Halsey, which ended in 2020

To date, the actor appears to be single

It is not possible to find him on Instagram: Peters does not use social media and is very reserved about his private life

About Dahmer, available on Netflix and also visible on Sky Q and via the app on Now Smart Stick, Peters said: “Ryan Murphy had given us a single fundamental rule to follow and on which to base our work: history would never have been told from Dahmer’s point of view. In this way, the public does not empathize with him and does not experience his situation from the inside, but observes it from the outside ”